I Worked As A Secretary To Esther Smith---Kumawood Actress Oduma 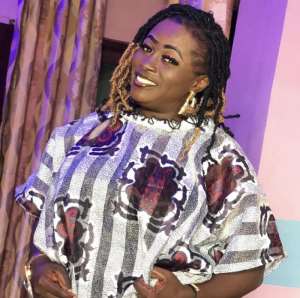 Ghanaian scriptwriter and actress, Ama Oduma-Odoom has revealed that she once served as the secretary to gospel musician Esther Smith after she completed her secretarial course.

According to the versatile actress who made this revelation to SeancityGh, she had to follow her passion, the reason she stopped working with the popular gospel musician.

"I worked as the secretary to Esther Smith after I completed secretarial school. I later realised I was lively because I could make my friends laugh. I even joined a drama group when I was in school at Juaben and I was doing well. So I stopped being the secretary to follow my passion".

Ama Oduma-Odoom was the scriptwriter for Abuburo Kosua, a Ghanaian series showing on Adom TV and produced by Mercy Asiedu and her husband.

She has however parted company with the Abuburo Kosua crew.

Latest Photo Reports
Catch up with all the political quotes from our politicians.
Advertise here
More Interviews
ModernGhana Links
Stop stealing songs – Songwriter to 'lazy' musicians
I Want To Use Music To Connect To My Fatherland — Fadu
Vodafone Ghana Music Awards 2021: Diana Hamilton Grabs 6 Nominations
Ladies are not Ready to Build with any Man...Flora Jacobs
Salma Mumin Debunks Rumour That She Removed Her Butt
WATCH: Travel the world amidst COVID-19 with Jynna Asiedu-Ofei and her Borga Diaries
Teni: Humanity Over "The Industry"
We Had Sex In A VIP Bus---Fameye Recalls Regrettable Experience
All Those Who Made Promises At My Father's Funeral Have Not Fulfilled Even One--Late George Forest Son
TOP STORIES