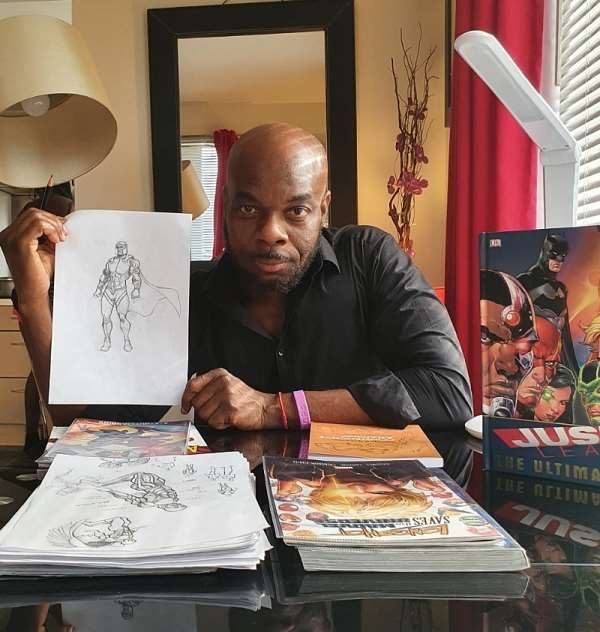 In what has become stereotypical about Africa with wars, poverty, and others that demean the continent, many have put it upon themselves to in their own way help change that narrative, one of such many is Modin comics.

Modin Comics is a Ghana-UK based graphics agency owned by Jeffrey Abban who tells TheAfricanDreamw.net that ‘Modin‘ in the Ga language of Ghana means ‘black person‘.

With the inspiration to challenge what they saw as unfair and untruthful stories peddled about Africa, Modin Comics is using graphic novels and animations to tell the world a whole newer and truer story about Africa.

Modin Comics’ Jeffrey Abban talking about a sketch (inset) from one of his comic characters.

Born and raised in Ghana, Jeffrey Abban, attended Soul Clinic International School for his basic education and Junior High School before pursuing High School education at Labone Secondary School in Ghana. At Labone he also studied for his sixth form education by majoring in geography, economics, and art.

While in his second year at KNUST, he was poached by a graphic design firm in Accra called Legends after he was spotted on a field trip there. That was the beginning of a new working relationship with Legends that lasted for three years well after his graduation. He worked as a graphic designer and an illustrator for them.

Before graduating KNUST however, Jeffrey told TheAfricanDream.net that together with his brother, they started producing a comic book series titled Mighty Joo. This project however did not see the light of day back then due to financial limitations and had to be shelved.

Inspired by the African proverb “until the lion learns to write, every story will glorify the hunter,” nurtured his Mighty Joo ambitions, and saw a moment to publish it when an opportunity to travel to the United Kingdom (UK) became a reality. “The UK wasn’t a bed of roses as I had imagined it, but it brought out my spirit of resilience that fed a burning desire to change the narrative about the African,” a feeling he shared with his brother.

It was their strongest desire to rise above all limitations that led to Jeffrey birthing Modin Comics in the UK whiles his brother, Jones Abban founded Parables studio back in Ghana. Both firms had the sole aim to “create a new breed of African superheroes indigenous in origin” with a strong belief that superheroes and their mind-blowing acts are in no way limited to skin color, race, or gender.

They also want to use this means not just to change the African narrative but as well empower the young African, preserve history, and make culture fun to study and discover.

Jeffrey Abban shares revealed to TheAfricanDream.net that he was inspired by the late coming’s legend Stan Lee of Marvel fame and Jack Kirby to take this path, saying further that given the opportunity, “I will love to work with Roye Okupe and Jid Martin. This is because Roye and Jid, both stalwarts in the comic industry are driven by the same vision I hold of telling a new African story that is true.“

“My first important work is my collaborative work with my brother on the Kickstarter for Mighty Joo in an animated short titled ‘Galamsyed’ which tackled the issues of harmful mining practices of Galamsey (Small-scale mining) in Ghana,” Jeffrey reminisced.

The projection of Jeffrey for Modin Comics this year is to come out with original stories for three of their characters; a debut novel unveiling Africa’s greatest superhero group, the African Defenders and another collaborative work with his brother’s Parable Studios that will feature the comic characters Mighty Joo and Asantewaa.

In concluding this inspiring and revealing interview, Jeffrey left TheAfricanDream.net with these words; “I would like to say, I am passionate about Africa and the opportunities present for us to change the unsavory narrative told on our behalf. The onus is on us to tell our story our way; the African way.”

Jeffrey and Modin Comics are spread across various social media platforms. On Instagram, find them as modincomics_gh, they are move-in comics on Facebook and are on YouTube as Parables Animation Studio.