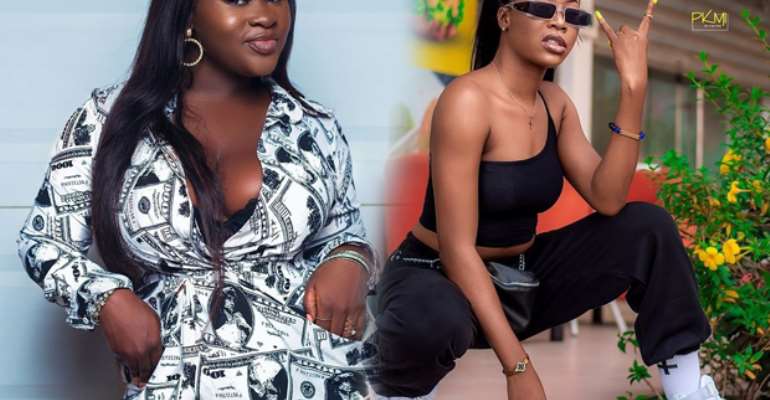 A Monday viral video captured Sista Afia and Freda having a go at each other in an attempt to fight at TV3's premises.

The two ladies traded insults with each other and were about to fight, but it took the timely intervention of the people around them to separate them.

Sista Afia could be heard saying, “Say it in my face, say it in my!”, indicating her displeasure with some of the 'punches' Freda threw at her in their rap battle.

The 'beef' between the ladies, however, started after Sista Afia released a single social media users described as a diss to Sister Derby and Wendy Shay titled 'WMT'.

Sista Afia, however, rubbished those claims, clarifying that her single was aimed at empowering women.

But that triggered what many have described as a reply from rapper Freda Rhymz, who released a track titled 'KMT' (Komot).

Rapper Eno Barony also came in hard with the song 'Rap Goddess', in what looked like she wanted to call the ladies to order. But Sista Afia replied throwing shots at both Eno and Freda with the song 'U Got Nerves'.

Eno didn’t back down, as she again came hard with the song 'Augment Done', thinking that would end the 'beef'.

However, Freda released another diss song titled 'Point of Correction', in which she alleged that Sista Afia had sex with Bisa Kdei, Shatta Wale and Medikal.

Sista Afia didn’t take the allegations lightly, as she threatened to beat Freda wherever they meet.

“I hope all these insults when u (you) see me u (you) will get that confidence to say it to my face,” she said in a tweet after Freda released 'Point of Correction'.

“Me if u (you) do I'll beat u (you). I don’t do social media attacks, one on one then we see who will be quiet,” she also added in another tweet to Freda.

It is, therefore, not surprising they engaged in fisticuffs at TV3.