“There’s Nothing Between Mugeez And Me” – MzVee 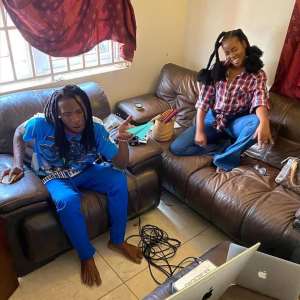 Not long ago, MzVee was trending after a lovely picture of her, and Mugeez hit the trends a blog site. According to most people, looking at their posture in the picture the two could be involved in an amorous relationship.

However, speaking to MzGee, the Sheriff hitmaker rejected any rumors about her relationship with Mugeez. According to her, they were on their way to shoot a movie and decided to take pictures while goofing off. She emphasized that Mugeez is like a brother to her so everyone should ignore such rumors.

The musician also used the opportunity to clear rumors about the misunderstanding about her new “Who are you” song. Stating that in spite of what people were saying about having ownership to the beat, she has a receipt that proves otherwise and has asked Ghanaians to overlook such allegations. She finally thanked Ghanaians for a warm reception after her break from music and promised them some good tunes after Corona was over.