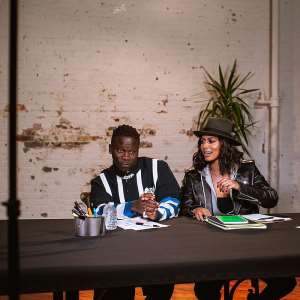 Keri Hilson, has been missing in the music scene, ever since she rose to fame in the 2010s for her mixture of R&B, hip hop, and pop musical styling as well as her chart-topping hits that touched up womanhood and love.

While Keri Hilson has since spoken out about why she took a musical hiatus, many think that Beyoncé’s loyal fans had a little something to do with the singer’s budding career taking a massive nosedive.

However, the rather excited Stonebwoy took to his Instagram handle and wrote, “It’s been almost 10 years? Since this amazing soul @kerihilson released any music and it’s a real honor to have her on #AnlogaJunction ….. this Friday @ 8 PM GMT ‘Nominate’ (The Movie) drops on my @youtube Channel! #tommyxlewis”

Keri Hilson features on Track 9 titled “nominate” on the Anloga Junction Album which is scheduled for release on Friday, April 24, 2020.