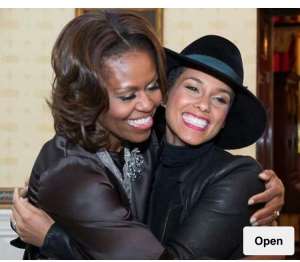 Former First Lady of the United States of America, Michelle Obama, has praised US singer and songwriter, Alicia Keys, in her new book.

In excerpts of the book, Mrs. Obama who herself is a celebrated author, observed with excitement that Alicia Keys has over the years put up impressive performances both in her acting and singing careers.

The former First Lady wrote: “Over the years, we've grown closer, and I've seen Alicia continue to shine in a way that only she can.”

The singer born Alicia Augello-Cook Dean, took to Instagram and Twitter on Tuesday to introduce the book her millions of followers.