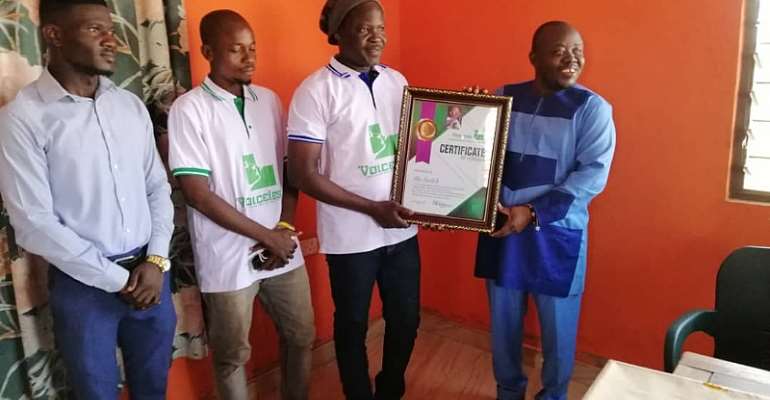 A Dagbani music legend, Abu Sadik was known in showbiz as Policeman has been honoured by the management of the Voiceless Media and Consult in Tamale on March 21st for his contribution to the development of Dagbani music in the Northern Ghana and beyond.

Speaking at the awards ceremony which was modestly done in Tamale, Chief Akilu Sayibu of the Voiceless Media fame explained that Abu Sadik has contributed to the development of the Dagbani music for over two decades and the time has come for him to be acknowledged and honoured for his huge contributions to the society through music.

The legendary Abu Sadik has over the years through his music served as a source of wisdom, inspiration, guidance, and motivation to many and deserves the honour done him by the Voiceless Media.

His music has brought happiness and stability to families and communities over the years for which reason he was recognised at a brief ceremony in Tamale on March 21st.

The Awards ceremony came with 100% sponsorship of the latest song track by Abu Sadick titled Dabiem by the Voiceless Media.

Receiving the award Abu Sadick disclosed that the decision by the Voiceless Media to honour him was first made known to him over two years ago and was pleased that the award which was dated February 14th, was eventually received and the first of its kind in his music career.

Abu Sadick also thanked Professor Habib Iddrisu of the School of Music and Dance of the University of Oregon in the United States who is also a renowned traditionally trained musician, dancer, and historian and a friend to the Voiceless Media for his association with his historic award and prayed for the very best for him in all his endeavours.

Chief Adam Cockra, a fan of Abu Sadick and a veteran journalist, Alhaji Sheikh Yakubu Abdul- Karim of Gubkatimali and Sule Salifu, the Northern Regional Director of the Youth Employment Agency were among the dignitaries in attendance.