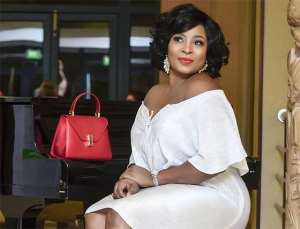 Ghanaian actress Gloria Sarfo picked her first Africa Magic Viewers Choice Award (AMVCA) at this year's edition of the ceremony held in Lagos at the Eko Hotel on Saturday night.

She won best actress in supporting role with her performance in Shirley Frimpong-Manso's sequel film 'The Perfect Picture: 10 Years Later'.

The AMVCA is an annual award presented by Multichoice recognising outstanding achievements in television and film throughout the African continent.

Gloria Sarfo made Ghana proud as the only Ghanaian to get nomination for the AMVCA 2020 and subsequently winning it.

In an interview with NEWS-ONE ahead of the award, Gloria believed she has been discriminated against in Ghana's movie industry for so long.

The AMVCA recognition is, therefore, a test to prove her talent.

She first auditioned for 'Perfect Picture' 10 years ago, but she didn't get the opportunity to star in the film's first instalment.

Finally when Frimpong-Manso cast her for the film’s sequel, she only played about four scenes in the movie. Interestingly, that is the only performance that got the film nominated for this year's AMVCA.

Over the weekend, a number of Ghanaians and showbiz industry players took their social media platforms to congratulate her on winning the award.

Why Implement Policies Of An ‘Incompetent’ Leader? – Former ...
10 minutes ago