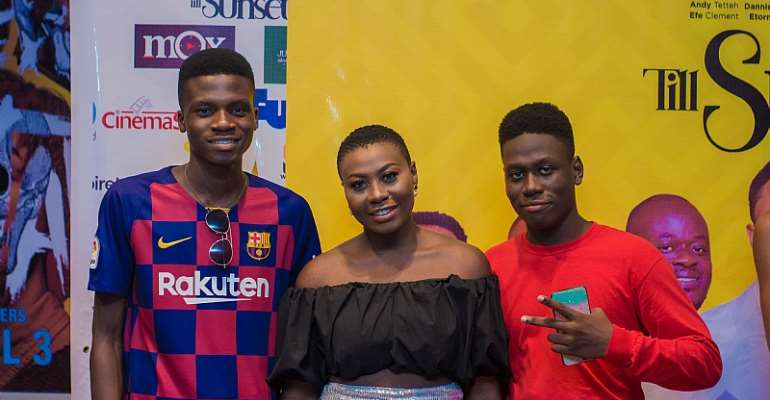 Green Lemon productions “TILL SUNSET” web series has made history with its silver bird cinemas premiere over the weekend.

The series Centered around the struggles of young graduates was received by thousands of people, both young and old who thronged the silver birds cinemas on Saturday, 29th February and Sunday 1st January, at Accra Mall and Westhills mall respectively.

Speaking in an Exclusive interview with Tieghanaonline’s Godwin Gabla after the premiere, the producer and director of the series, Joseph Clef Aboah expressed his excitement and appreciation for the support shown to his art.

“I am sincerely excited and surprised. You know, before the premiere, most industry players said we won’t sell tickets because we don’t have popular faces in the film. But well, by the grace of God, we’ve been able to shame them and also prove a point that it’s about quality and not just the faces.” He said.

The first season of Till Sunset was earlier shown on YouTube for some weeks before the decision to take it to the cinemas for mass viewing.

The season two is expected to be shot this year and made available for public viewing.

So far, comments from the general public about the series have been positive.

Meanwhile, the series has been recognized by various film festivals and awards including the Accra Indie Film Festival, The Lift Sessions, The Bebop Channel Content Festival among others.

Check out images from the premieres and the official trailer for the series below:

Congratulations to the cast and crew for the massive work put into this film.

More Movie News
ModernGhana Links
Ghana’s Pat Thomas song features in season finale of Marvel’s Loki
I don’t sleep around for movie roles – Angela Eguavoen
They are there for their selfish gains — Mkki Osei Berko lashes out at Ghana Actor's Guild
Majid Michel cools off with Chris Attoh after 6years
Kwame Sefa Kayi says Ghana has no film industry
Tell the African story in your movies — Akofa Edjeani tells movie producers
Covid-19: I was locked down for a year in USA - Filmmaker Sammy Tuger
Frances-Anne Solomon announces incredible line–up of films for 2021 film festival season
Tyler Silvers shares the secret to getting your first screenplay picked up
TOP STORIES