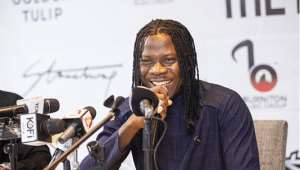 Stonebwoy is gearing up for the release of his 5th studio album which is titled, Anloga Junction scheduled for this Thursday, March 5, 2020. Stonebwoy has been one of the few consistent artists over the last decade and still going stronger with each passing day musically.

His fans are waiting with bated breath to listen to the sweet melody he has lumped onto this album as well as all the artists he featured. Some have already started asking why he chose a name like this for his album. Well, the Dancehall artist offered an explanation on his Facebook platform.

It reads:
Anloga Junction is a major junction that connects all Anglo towns and communities. It is the junction that leads to Alakple, the hometown of Stonebwoy.

Alakple is a town in the Keta Municipality of the Volta Region of Ghana. This town is situated along the southeastern part of the Keta Lagoon. The bust of the prominent Africa American boxer George Foreman is planted at the junction along the Anloga and Dabala road. That road leads to Alakple.

The town is prominent for the historical role it plays in the area. It is the home of the Nyigbla, ‘god of war’ who rode on horseback. The major clan in the town is Ameawo who are the custodians or clan responsible for nugbidodo ‘settling disputes’.

They are also believed to have control of all palm trees in Anloland. As custodians of Torgbi Nyigbla there are many taboos related to their dressing and food. for instance they are forbidden to wear shirts or blouse and sandals within the shrine.

Watch Stonebwoy talking about the album below