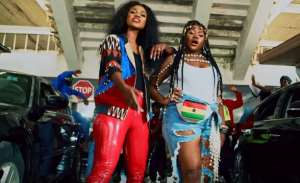 The highly credible Ghanaian female musician, Becca, has after a long inconsistent break from the music industry recently has had a vibrant revival with her back to back hit songs.

Though her brand is perceived as one of the cleanest and a longstanding one, it seems her recent song with Busiswaah ”no one” has been wrapped with allegations of copying a popular tune from South Africa’s Sho Madjozi’s John Cena.

According to twitter trends, the popular Ghanaian musician in spite of her new danceable style borrows a striking resemblance to that of the South African musician. Some believe she knows too much to be intertwined with such controversies and opine that, her version was below the standard Sho Madjozi set with her John Cena.

Others believe that these two pieces are very different masterpieces from two very different great artists with different styles. They believe that Becca did justice to the song and do not accept any plagiarism claims against Becca, to them, “No one” is one of the finest pieces of Becca and should be supported and pushed by Ghanaians 100%