Chris Brown Regret Having Tattoos On His Face 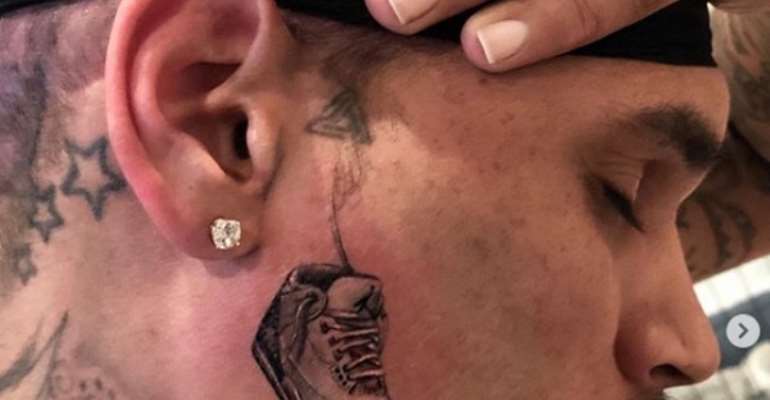 Chris Brown's latest body art has been unveiled on Instagram - he's had a Nike Air Jordan shoe tattooed on his cheek.

A Los Angeles tattoo studio posted a picture of the singer's face, showing the freshly-inked artwork.

He's not the only star who's had a tattoo on their face recently - model and actress Amber Rose has prompted a lot of chat online after going public with her latest tattoos.

An Instagram post revealed she's apparently had the names of her two sons, Bash and Slash, inked on her forehead.

Both stars are proud of their new tattoos, but other people who've been inked in visible places have had mixed feelings after getting theirs done.

Radio 1 Newsbeat's spoken to other people with visible tattoos about what inspired them and whether they've come to regret them.

'If I could go back and make the decision again, I wouldn't do it.'

Kevin Paul is a tattoo artist and says he regrets getting his face inked when he was younger.

He tells Newsbeat that it has an impact on how people perceive him.

"When I had my cheeks done, I noticed the world was judging me in a completely different way. Some people you go near stare at you a lot."

Kevin says if you've got a normal life and job, it can "have a massive impact" on your life.

"Celebrities like the US rapper Post Malone are getting face tattoos now. Which is all right for them. They're millionaires and pop stars."

Tattoos have been in the news a fair bit recently, after the boss of the Apprentice, Lord Sugar, called out Lewis Ellis - a contestant from the show - for having tattoos on his chest and one arm.

Lewis tells Newsbeat that the stereotypes around body ink are outdated - but that there's still a stigma around face and hand tattoos.

"Which is a shame because it doesn't matter what you wear or what you put on your body or how you look like."

"You should be judged on your own merits in business or in your career or your workplace. It should be based on how well you can do the job."

The law in the UK currently allows those who are 18 or over to have a tattoo anywhere on their body.

But in the workplace - there are no protections against an employer discriminating against someone because of tattoos.

Ben, who is in the army - has had mixed reactions to his tattoos in the workplace.

He says he was allowed to have tattoos while in the army as long as it wasn't offensive.

But it was a different story when he applied to transfer to the Royal Air Force - because he says at that time they didn't allow tattoos below the wrist.

"Moving between the services is usually a simple process. But for me, my tattoos posed an issue.

"Tattoos are commonly displayed on the hands of young people and are art. It's an expression and it shouldn't dictate your future career."

The RAF has recently changed its policy on tattoos meaning personnel can display more body art while serving.

New rules now permit personnel to have tattoos on their eyebrows, neck and hands. But single tattoos on hands are allowed only if they can be covered by a ring.

Grace, 28, says her hand tattoo made it "extremely difficult" to get a job.

"When I was 24, I was offered a job in pharmaceutical sales. But it seemed like as soon as they found out about my tattoo, they said I wasn't right for it anymore."

She says since then it's been hard to get a job in sales, which is what she wants to do.

"It feels like having a tattoo is not socially acceptable."

The British Tattoo Artist Federation (BTAF) has called for greater regulation around the inking of face and hands.

Lee Clements, a BTAF spokesman, tells Newsbeat that there needs to be more information available for people getting face and hand tattoos - and the effect it could have on their future job prospects.

He says young people often get these types of ink "because their favourite celebrity, pop star and footballers have them".

"I believe that tattoo artists have a moral obligation to their customers and especially young people who want to get facial tattoos."

And tattoo artist Kevin agrees.
He says his own decision to get a face tattoo was an "immature" one.

"Through most of your 20s, you're thinking about living life in the moment."

Kevin says tattooing nowadays is about fitting in and "trying to get that next picture to impress people and stuff like that."

Which is why he thinks raising the age limit from 18 to 21 would be a good start.

But not everyone thinks there's an issue with face or hand tattoos.

Louis James says he's "never had a boss who's had an issue with it".

"I've only ever had positive comments. I don't think employers should target people with visible tattoos."

And NHS worker Holly Wilson-Morgan has her wife's initials tattooed on her fingers and she says she has not been asked to cover up her ink.

"The way you look shouldn't have any effect on your ability to do your job.

"Your ability to do a job should purely be based on your qualifications and whether you're actually good enough.