A Drop In The Bucket For Disadvantaged Creators 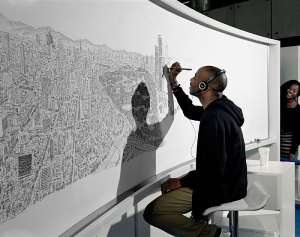 After flying just once over Mexico City, artist Stephen Wiltshire drew the entire cityscape from memory on a 4-metre (13-foot) canvas.

In recent times, social commentary and movements are on the tide of the ill advantaged, sparking the conversation of equality and balance, but even in that sphere disabled and disadvantaged still lack access.

In 2019, a video went viral of a 10-year-old schoolboy doing his assignment at an Apple store with the internet. While that signaled the strength of the community, it also started a conversation about equality. https://twitter.com/InactionNever/status/1194462402420584448

Many believing he was already disadvantaged among his peers and a basic amenity like access to the internet was setting him back.

This viral video went round at the time when Elizabeth Warren was campaigning for more taxes on the rich, making similar points to the one we are making now about access.

In this conversation, some of the most disadvantaged groups in these systems are black and brown people, lower socio-economic classes and disabled people.

But in today's world, access goes beyond the internet and in fact the internet has made it possible for otherwise marginalized or micro-groups and organizations including ours able to access more people and create waves across the world.

This thinking is the storm behind Artnoise's Digital program (https://artnoiseng.com/digitalresidency/) which is an online program hoping to give more access to both disabled and disadvantaged creators.

The program offers a platform for creators who cannot afford travel or tuition to improve their skills, reach across the world and also the opportunity to exhibit their art.

With social inclusion and diversity making more waves today, the program hopes to enable more people across race, across ethnicities and across medium to lend access and reach to as many people as we can support in 2020.

Other current social and perhaps health issues behind access includes tightening borders and immigration laws globally, climate change threats and of course the growing threat of the coranvirus which broke out in 2020.

Here are some disabled artists who are already making their impact (https://www.boredpanda.com/inspiring-disabled-artists/?utm_source=google&utm_medium=organic&utm_campaign=organic)

Of course this gesture remains little more than a drop in the bucket, but as the poem says, little drops of water make a mighty ocean.