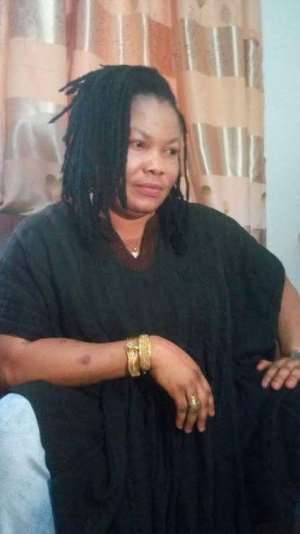 Renowned Ghanaian fetish priestess, Nana Agradaa, has spoken on a viral video of her worshipping at Glorious Word International Ministries.

In an interview on Adom FM’s Work and Happiness, she stated that as human, she had only gone to the church premises to worship God, as “ it is required of everyone to give unto Caesar what belongs to him.”

“As humans, we must know that of all the powers of the world, God’s power is the greatest, therefore, anyone who does not acknowledge the power of God is not human,” she told host, OPD in the Twi dialect.

She added: “I particularly believe that despite how I work with and worship smaller gods, I still believe that God loves me by granting me the gift of life, the air that I breathe, so what stops me from showing my appreciation after I have gratified lesser gods all year long?”

Earlier this month there was a viral video of the fetish priestess worshipping at the Glorious Word International Ministries. Some persons criticised the church leaders for allowing someone whose religious beliefs are not compatible with the doctrines of Christianity.

Reacting to her critics, the priestess said she “strongly believed, that day while I worshipped, the angels rejoiced with me because God has done so much for me and nothing stops me from praising God all times.”