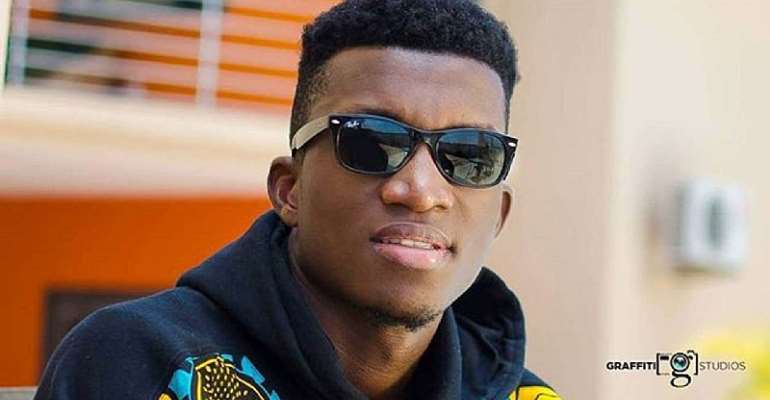 In October 2019, a month ago, the Things Fall Apart writer and singer, Kofi Kinaata (formally called Martin King Arthur) released his song that took to the music industry and caused a stir online and on the airwaves. Ghanaians on Twitter reacted to the song by tweeting their opinions of the song – some quoting their favourite lines of the song and many more hailing him for the message of the song.

The Western Regional award winning song-writer and singer came to the limelight when he featured on Castro’s Odo Pa (2013). Two years later, he collaborated with Donzy and released The Crusade (2015). He is also known for hits like Susuka (2015), Sweetie Pie (2016), Confession (2017), Time No Dey (2017), and very recently, Things Fall Apart.

Kofi Kinaata, is a Highlife/Hiplife musician who comes from a Christian home in Takoradi. Born into a Christian home with a father who is a past or and a bible studies teacher in his church, it is expected that he is raised with Christian moral values and with the Bible. It is therefore not a wonder that many of his hit songs such as Confession, Susuka and Things Fall Apart appear to draw from his family and Christian background with references to God and Christian lifestyles. According to AnswersAfrica.com, Kinaata is influenced by the reggae musician, Joseph Hill and his songs which preach love, unity and peace.

Since hearing Kinaata’s music in 2015, when he released The Crusaders – I will always have it in my memory as the song that brought him to my attention – I have found his sense of humour as a musician refreshing as well as his choice of language when rapping and singing. These set him apart, in my opinion, from other musicians. More than that, I respected him for the themes he addresses in his songs and his innovative and ingenious music videos also were not in the usual trend – there was no use of nudity which many artists use in their videos to pull certain viewers with a taste for women nudity – he chooses very traditional settings that showed a true reflection of the reality of the time. His themes have always had a social import and dealt with issues that plagued the Ghanaian. These elements are not absent in

Things Fall Apart.
The title of this new song immediately brings to the mind of any literature student or African novel lover, Chinua Achebe’s popularly known novel of the same title which portrayed a protagonist who did not want to accept the changes of the colonial era, especially with the coming of a new religion and education. It is however, clear from the lyrics that he is referring to falling standards of morals in today’s Ghana. And he chooses to use a familiar ground – church members and leaders – to channel his message.

His refrain which translates in English as “And so is this how we are worshipping God?” is the rhetorical question directed to the church in Ghana and the Christians in Ghana. The title is mentioned once in the song when he refers to the churches with schools that their members cannot afford. It is absurd and really goes to support his claim that things have indeed fallen apart there.

The introductory lines are profound and attest to Kinaata’s skills as a songwriter. Without saying much he makes use of metonymy and imagery and paints a picture of double standards of most church members in Ghana. As depicted in the poster for the song, a black man holds up the alcoholic bottle that is laced with the rosary. In Ghana, Fridays in the Christian circles are associated with all-night church services where the congregation is believed to be praying and warring against the devil who is blamed for all their problems.

At my first hearing of the song, I played with the idea that Kinaata may be addressing the colonial theme when he says that the colonial forces that brought the Bible also brought the alcohol. I wondered if he wanted to tackle the double standards from the colonial point. I settled with the opinion that he uses it as an extended metaphor to propagate his theme. The mention of the alcohol and Bible, coming from the same source is, first of all, used as the excuse for living double standard life by those who are two-faced. Secondly, that all humans are capable of good as well as evil, but it is our responsibility and we must choose the right path.

Thirdly, that the colonial experience brought some good and also bad experiences and again, we should be able to discern and choose the good experience and use it for our development. In sum, we learn from the past, use it in the present and look forward onto the future.

Another strong message that resonates in the refrain is the issue of hypocrisy. And though the framework is as I have mentioned earlier his most familiar setting; the church, he strings this hypocrisy theme through the religious, to the political and to social institutions. He sings to every human being that can hear and understand the song, asking a question that demands his listeners and fans to (ask their friends and ask themselves to) examine their lifestyles, if they are worshipping God right? or as the refrain says “… this is how we are worshipping God?”

With regards to religious institutions, the song addresses the silence of pastors over the bad lifestyles they witness in their members and how the Bible is used to their convenience to become sovereign in their ways. He uses in particular, the verse in 1 chronicle 16:22/Psalm 105:15, which says “do not touch my anointed and do my prophets no harm”. According to Kinaata, this verse becomes the trump card these pastors pull on the masses to avoid being checked or spoken against when they are clearly in the wrong.

In the name of God they do the unspeakable and use the name of God as a cover. Not too long ago a pastor with many followers was arrested for promoting wee smoking in his church. Stories of pastors who also verbally and sexually harass their members, are not wanting. He does not leave Muslims and traditionalists out. There is a mention of Muslims who drink and claim they are “American Muslims”.

With regard to the political setting, he bemoans corruption and the disservice to the citizens who voted these politicians into power. The reality of bad road networks that prevail in the country is given a mention and the floods that come with rains, rendering many homes inhabitable and some roads that cannot be plied after rains.

In the social setting such as educational institutions, the issue of “sex for grades” is brought to the light. A lot of these lecturers are Christians or Muslims whose religious tenets forbid such immoral actions. Kinaata also focuses on people who covert their fellow’s partner (husband/wife) and properties to the point of shedding the blood of their neighbours in order to own what belongs to their neighbours. Also mentioned are those who cannot be patient and work through the process to succeed but want everything on a silver platter and thus will resort to blood money to become rich.

I mentioned earlier that his sense of humour is an element that I find refreshing in his art. I will point out here some of the elements of humour that I find in the song. Kinaata may not have meant to be humorous however, I found myself laughing from these. The first is the mention that on the Day of Judgment, God will have to make some considerations else he will have nobody in heaven. Of course, this is not something to laugh about if you believe in heaven. This implies the lack/falling of standards to a low level in modern times that God may have to lower his standards to get people in heaven.

So many people will not make the mark due to us falling short of his glory. Second is the mention of the Jehovah Witnesses. So many humorous stories abound on the topic of Jehovah witnesses especially with regard to their persistence. But what is hilarious is the imagery of people running away from them and giving all sort of excuses to avoid them; a realistic painting of today’s society. Their attitude to propagating their gospel is I must say, admirable yet sometimes a bit intruding, for lack of a better word. Thirdly, the metaphor Kinaata uses in comparing husband snatchers is, without doubt, a rib-cracker.

Kinaata compares them to plaster on a wound: that these “side chicks” stick so close unyieldingly to another woman’s husband. Lastly, what many people find as a punch line, towards the end of the last verse, when Kinaata says, “Part-time Christian you wan’ fight full-time devil”. I agree that it is a heavy punch line and incredibly weighty with a truth while being humorous for its suggestion of part-time and full-time jobs. There is no winning for the part-time Christian.

Things Fall Apart is a song that describes, unbiased, the realities of a religious country struggling to find the thin line between morality and religion. The two can be confusing sometimes as clearly painted by the Kinnata’s lyrics. It offers a pearl of subtle wisdom that only answers to the questions posed by Kinaata can uncover. Despite its many philosophical intakes, the song can be grooved to by those who prioritize instrumentals and those who consider content before taking a liking to songs alike. Both factions are in good luck. They will be delighted to sing along to the agreeable didactic content of the song while tapping their toes to the instrumentals. Kinaata does well to sing clearly, paying attention to diction so that listeners can hear and ultimately absorb his message.

Hmmmm
The sky is definitely the limit!!!
Keep up the good works
Source: Amu Mawutoh via theamumawutoh.blogspot.com

Modern Ghana Quote Reports
Catch up with all the political quotes from our politicians.
Sponsored
More Opinion
Modern Ghana Links
Okomfo Kwadee: A Phenomenal Rap Story Teller And A Legend
Hip hop and Pan Africanism: From Blitz the Ambassador to Beyoncé
Our acts, our arts and the act: an open letter to President Akufo-Addo
Will 2021 be a good year for the creative arts industry ? - Attractive Mustapha writes
Open letter to Afia Schwarzenegger
Let's Tell Stories Of Our Heroic Leaders, A Call On The Creative Arts Industry
Celebrity Recommendation Is Not A Political Endorsement.
Sarkodie Must Apologise To Kuami Eugene For Endangering His Career In "Happy Day" Song
Christianity And Music
Quote Reports Dossiers
TOP STORIES