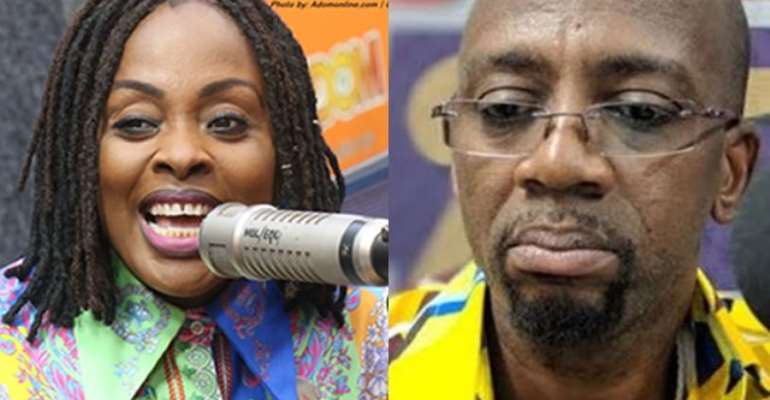 Highlife musician, Akosua Adjepong, is fighting the Chairman of the Ghana Music Rights Organisation (GHAMRO) over the structure and mode for collecting and distributing music royalties.

Akosua Adjepong, a former member of GHAMRO, has accused Mr Rex Omar of misappropriating funds collected by the organisation as music royalties.

Speaking on Adom FM’s Dwaso Nsem’s anti-corruption segment, Fabewoso , on Wednesday, Akosua Adjepong and another former member of GHAMRO, Mr Awuku Hagan, slammed the current Board of GHAMRO for non-payment of royalties.

According to them, the monies retrieved by GHAMRO as music royalties were way higher than monies they distribute to registered musicians under the umbrella of the music rights organisation.

“GHAMRO has a lot of money but just they are being heartless with the people.

"They have failed to pay royalties due creative art workers while we wallow and die in poverty. GHAMRO is hurting musicians,” Akosua Adjepong fumed.

Reacting to these comments on the same Dwaso Nsem morning show on Adom FM on Thursday, Rex Omar rubbished the allegations made by Ms Agyapong and Mr Hagan.

“They are doing politics. Akosua Adjepong and some people wanted to get a license from the Attorney-General to also collect royalties but they were denied.

“Awuku Hagan [who is] supporting her was also a staff in Carlos Sekyi’s administration. When we came, we sacked him and he is peeved. We didn’t see what he was doing,” Mr Omar explained.

Mr Omar revealed what baffles him is that in the previous administration of GHAMRO, which included Akosua Adjepong, there was never an annual report although it was required by law.

In response, Ms Adjepong said the Attorney-General did not halt her moves to own her own music royalties collection agency.