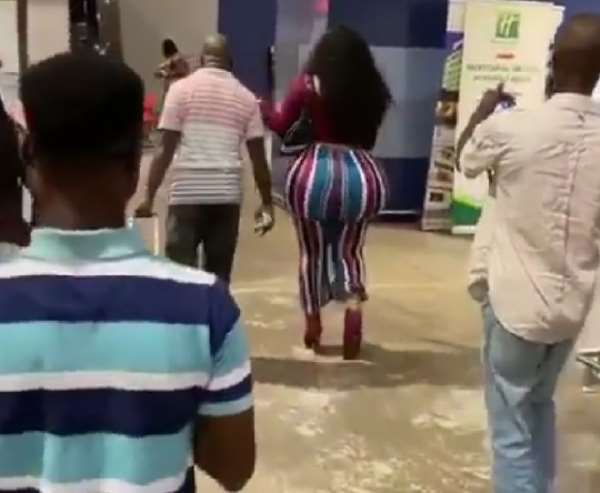 Jaye Love, an American club DJ and Instagram model, is the lady who got everyone screaming about her 'big-sized back' when she touched down at the Kotoka International Airport (KIA) in Accra during the festive season.

A video of her which went viral on Ghana’s social media space captured a lot of Ghanaians rushing to catch a glimpse of her butt and also take photos of it.

This created a scene at the airport, sources told NEWS-ONE.

The incident generated a lot of conversations both on social media and traditional media platforms over whether it was harassment or not. Some well-meaning Ghanaians registered their displeasure over the incident because they felt it was not the best way to welcome a visitor at a time Ghana is advocating people from the Diaspora to visit Ghana as part of 'Year of Return' programme.

Meanwhile, it appeared Jaye was not peeved at all. She also shared the viral video in which was seen being chased by some people at the airport to take photos of her butt on her Instagram.

Jaye Love is popular on Instagram because of her jaw-dropping backside.

The curvaceous model has been flaunting her well-endowed body on her social media handles, which always causes an uproar on the internet.

She has also denied several claims that her butt is 'fake'.

Like the many visitors, she expressed her happiness for spending her holidays in Ghana. She visited a number of clubs partying at Club Onyx and hanging out at the Labadi Beach, as well as meeting rapper Sarkodie.

“Had a blast meeting my supporters and taking pics. It's crazy I never knew so many people knew me. That's an honor. Thanks to my Day1s @getfitwith_zamani for picking me up (300lbs) so I wouldn't be drenched from the water @tomjay0147 @stayclean93 and Graman,” she wrote on Instagram after one of her hangouts.