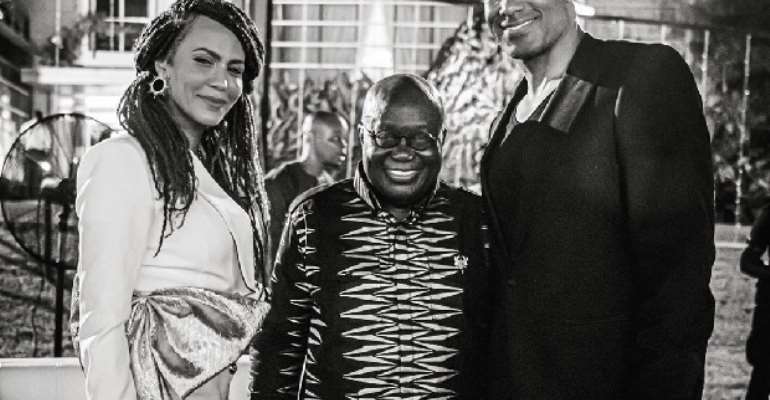 President Nana Akufo-Addo hosted some African-American showbiz personalities on New Year’s Eve, at a private party held at his Nima residence in Accra.

The party on Monday was, among other objectives, to make the personalities feel at home and celebrate their return to Ghana as part of the 2019 'Year of Return' programme.

Some of them have been in Ghana for weeks, taking part in various activities earmarked for the 'Year of Return' 2019.

The programme was introduced by government to encourage people from the Diaspora to visit Ghana and connect with their origin.

The President also launched an extension of the 'Year of Return', which he called 'Beyond The Return, The Diaspora Dividend'.

The group has visited places like the Cape Coast Castle and also partied with the President.

“Look who I ran into at an amazing party at His Excellency Nana Akufo -Addo's beautiful home. In Ghana tonight The gorgeous Lupita…Skin just like pearls for real “Pretty like Lupita when the cameras roll in” Brown skine girl lyrics,” Beyoncé's mother said on Instagram when she posted an image from the party with the President.

“When I introduce @nimotalaiganiyu as “my assistant”, people usually think I said “my sister”… and now we're twinning on our 3rd trip to Ghana this year, celebrating at The President & First Lady's cocktail party,” Bazoma also posted after party.

Davido also posted a video of himself having a good time with the President and First Lady Rebecca Akufo-Addo.