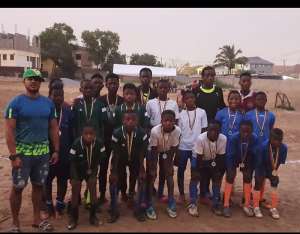 Popular Ghanaian actor Van Vicker began a maiden soccer gala for under 13 kids in and around Spintex in Accra at Spintex Batsonaa TMA park.

The celebrated movie actor, brand Ambassador and philanthropist established his foundation in 2009 and decided to hold a football gala this year with the aim of discovering talents.

According to him, the likes of Ofori Quaye, Stephen Appiah, Thomas Partey, Christian Atsu, Mubarak Wakaso started their career right from moments like this during their teenage.

"My son, Joseph Fiifi Van Vicker II was a participant his team, Sky Orange United (team A) won the soccer gala", he told this reporter

The game was conducted such that teams played 4 aside. 20 minutes running time per game.

Winners and coaches were rewarded with trophies, medals, drinks, biscuits and toffees as prices.

Some guests and spectators were fed at the end of the gala.

Van Vicker expressed joy for the success of the event with the hope of accessing corporate support and raise the stakes to enable an increase in the number of participants.

2023 Budget: Any bill that comes before parliament will go t...
34 minutes ago