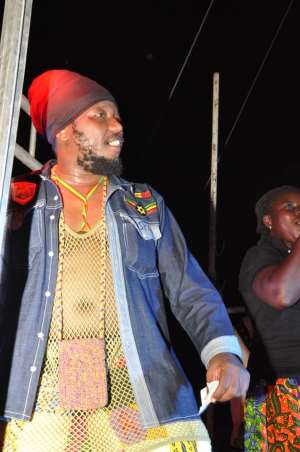 On New Year's nite when the city of Accra was inundated with activities in every corner, the Kuchoko Legend Blakk Rasta was sweating it out in Ashaiman for the first time.

I chanced upon the advert earlier that day for a Blakk Rasta concert which was hurriedly organised in five days. I had never seen Blakk Rasta in concert so I decided to travel two hours away from the heart of the city to Ashaiman and, to my surprise, the Falcon City Restaurant at Lebanon School Junction was packed beyond capacity, upstairs and downstairs. I managed to buy two Sharwamas which gave me a tiny space in a tight, hot corner from where I could watch the action on stage.

At 11pm Blakk Rasta made his appearance on stage and security had an issue with marauding fans screaming and bellowing his name. Once on stage with his Herbalist Band, the herbs were ablaze in a bonfire which was aflame for about two hours of Kuchoko warfare which massacred twenty two songs. Awesome! I was shocked how the artiste gnawed through his repertoire in such a picturesque fashion full of energy and vibe.

The power was unconquerable and another thing that dumbfounded me was how the crowd sang along every one of the 22 songs Blakk Rasta performed on stage. I never fanthomed that this superb radio broadcaster who I listened to had such a magnificent collection of songs so popular that even, seemingly drunken guys on the night chorused through the songs. I hardly heard Blakk Rasta's songs on mainstream radio in Accra so I was really bemused to see the craze around the artiste.

The Herbalist Band was on point as they belted out hot Kuchoko music which is a blend of Reggae and African rhythms to the unsuspecting audience. The energy was encapsulating and each time Blakk Rasta announced the end of his performance, the crowd roared in disagreement and called for me. Songs such as Barack Obama, Jameela, Chucku Laryea, Taakama, Gaafara, Kwame Nkrumah, Dumb Trump, Sakina, Iyawata, Zantan Bua, Letter from Babylon et cetera rocked the stage with untold energy and, as a fan of good, authentic live music, I was left totally seduced from head to toe. I had never encountered a live band artiste all through my journey in Ghana for the past few years who stood on his feet belting out 22 songs with such untold energy for 3 hours of pure fireworks.

I requested for another Sharwama but I was told all the food was finished. The restaurant had ran out of food. The crowd had gorged their insatiable appetite on the food to the glory of Jah. It was time to go home after grabbing a copy of Blakk Rasta's new 2-CD, 32 song album, TIMBUKTU BY ROAD.

Other artistes who performed and gave a good account of themselves included Vibration Kings, Commander Messiah, Luther King Band, Ever Blazing, Isaaqa-Ba, Fadi B, Saint and Ras Adidi.

Increase farm gate price of cocoa to GHS1k per bag for farme...
30 minutes ago