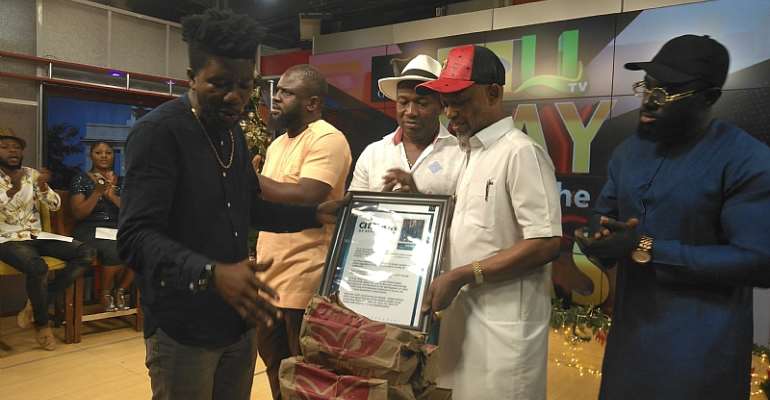 As part of the birthday celebration, UTV organises a day with the stars event to celebrate Fadda Dickson for his instrumental role in the media on January 1.

Against this backdrop, Ghanaian Music Legend TiC, surprised Fadda on the night with a cameo appearance as he mesmerised music lovers who gathered at the Ship House to celebrate the day.

Shortly after his performance, TiC presented 20 packs of Pizza and Rice from his Gennex Pizza Restaurant and Grill.

Additionally, he presented Fadda Dickson with a citation for contributing to his music career.

On his part, Fadda Dickson also expressed his appreciation for the gesture, and thank TiC for honouring him on his birthday

The citation read, "It is not surprising that you are Fadda Dickson Narh , indeed, your fatherly heart knows no boundary and has raised people from nowhere to higher heights. A selfless individual always eager to ensure comfort of others regardless of the consequences is worthy of celebration. Your compassion and desirousness to put smiles on the faces of people can never go unnoticed. It is for these reasons, Nana Kweku Okyere Duah, affectionately called TiC, and TN Records, acknowledge your immense contributions to the development of radio, television and entertainment industries in Ghana, for which I have benefited in many forms. May your path continuously be blessed, Fadda Dickson Narh, Managing Director of the Despite Media Group comprising Peace FM, Hello FM, Okay FM, Neat FM, United Television (UTV) and Peacefmonline."

Modern Ghana Quote Reports
Catch up with all the political quotes from our politicians.
Sponsored
More Celebrities Birthday
Modern Ghana Links
Stonebwoy Surprises Adebayor with breathtaking performance on his birthday [Video]
Van Vicker To Reward His Fans From August 1 To 14
Kwame Sefa Kayi Childhood Picture Pops Up
I'm Getting Married On My Next Birthday -Zionfelix
You're My World — Mahama Tells His Wife On Her Birthday [Photos]
Jackie Appiah, Nadia Buari,Desmond Elliot, Mcbrown, Others Celebrate Roselyn Ngissah On Her Birthday
Happy Anniversary: The Commeys Clock 15
Van Vicker Heap Praises On His Wife On Her Birthday Today
Velma Owusu-Bempah Releases New Photos For Her Birthday
Quote Reports Dossiers
TOP STORIES

Don't succumb to pressure to support LGBTQI agenda – GMM to ...
2 minutes ago