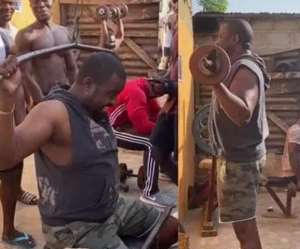 Actor John Dumelo, as part of the activities of this yuletide, decided to visit a local gym in his community to exercise with its members.

He was cheered on by some of them as he made attempts to utilise most of the equipments that were readied for him.

John Dumelo early December playing cards with some of the boys in his neighbourhood.

In another video, he was seen carting garbage, collecting refuse and cleaning gutters choked with filth in some parts of the Ayawaso West constituency.