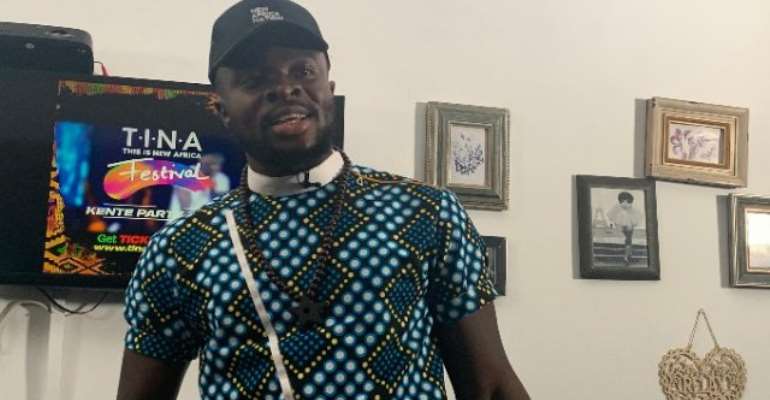 The three-day Festival will be held from the January 1 to 3, 2020 has a mission to become the home of Afrobeat music and lifestyle and to forge deeper connections between Ghanaians and the African diaspora through music and culture.

TINA Festival will feature a line-up of events that celebrate African excellence such as the Nation Building Day, New Africa Nation Conference and the Kente Party/Music Festival.

Leading up to TINA Festival, Fuse ODG will host the Power Brunch Club in partnership with Starbites at Starbites Airport City from the December 29 to 30, 2019 at 10 am to connect diasporans visiting Ghana with successful entrepreneurs who will share their experiences over a brunch buffet and music.

TINA Festival will kick off on the 1st of January with the Nation Building Day where Fuse ODG will travel with supporters to his Wood World Mission Charity School in Akosombo for a day of service, cleaning, painting and delivering school supplies and equipment including 100 computers donated by Absa Group Limited (formerly Barclays).

Supporters will also join celebrity guests for an exciting boat ride, tour and lunch enjoying the beautiful Akosombo landscape and make a contribution to the school.

Day 2 of TINA Festival will be the New Africa Nation Conference on the 2nd of January at the Accra International Conference for thought-provoking discussions on reshaping the narratives surrounding the African Diaspora.

This is to serve as a catalyst for growth and innovation which features Ghanaian and African diasporan panellists.

Some of the speakers include Award-Winning British-Ghanaian entrepreneur, Dentaa Amoateng, British rapper and political activist, Akala and Founder and CEO of Tastemakers Africa, Cheraé Robinson.

TINA Festival will climax on January 3, with Ghana's biggest Kente Party in partnership with Polo Beach Club at LabadiBeach Hotel.

"Africa's leading voices will use TINA as a platform to showcase the glorious colours, sounds and tastes of a continent negatively misrepresented. TINA Festival will serve as a rallying point for black people all over the world to embrace their heritage and rewrite the African narrative.

"As the first event to kickstart Ghana Tourism Authority's year-long calendar of activities inviting the global African family back home, it's only fitting that we will also bring Year of Return initiative full circle with a bang!" shares Fuse ODG, a Grammy Award-winning Afrobeats pioneer and Cocoa and Tourism Ambassador to Ghana who is committed to using his music and influence to re-educate how Africa is perceived in the world.

"We launched the Year of Return programs in January with Fuse ODG and TINA Festival. Fuse's energy and passion for Ghana and Africa and his vision for engaging the diaspora with TINA Festival made him a perfect partner for Year of Return.

This year was a success and we are already looking ahead towards the future to see how we will continue working together with Fuse ODG and further engage more young people throughout the diaspora," said Akwesi Ababio, Director of Diaspora Affairs, Office of the President and Chairman of the Year of Return Steering Committee.

TINA Festival is dedicated to being a platform for the promotion of Community, Conversation and Culture in Africa and the diaspora.