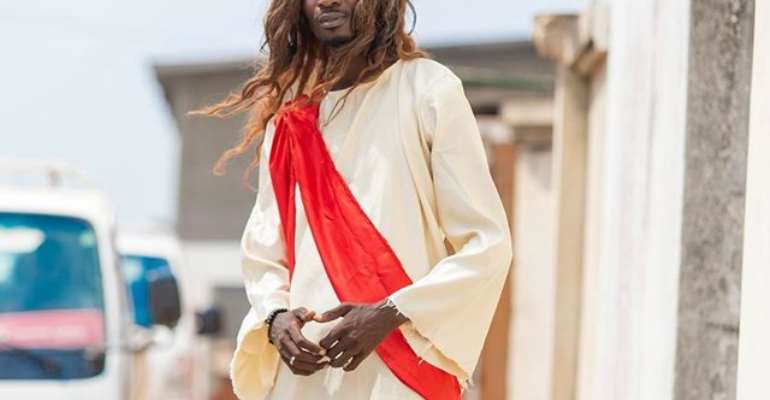 Social media sensation, Justice Hymns, popularly known as Mmebusem, has stated that criticisms he had faced since he began his acting career as ‘Jesus’ have shaped him for the better.

In an interview with Hitz FM’s Doreen Avio, he said that he appreciates all those criticising him explaining that he has a better sense of direction and has no intention of quitting, regardless of the backlash.

Mmebusem went viral in late 2019 after a video of him playing the role of Jesus while dressed in a white robe and wearing a wig, went viral.

Some popular men of God including few celebrities have cautioned the popular internet sensation, also known as ‘Local Jesus’ to cease mimicking Jesus or face the wrath of God.

According to Prophet Obrempong CP of Dominion Prayer Battalions, God had revealed to him that Mmebusem will soon go blind and die if he failed to put an end to his blasphemous act against the Holy Spirit.

Reacting to the criticism Mmebusem said "I don't have any plans of stopping. Even the Jesus they are fighting for when he came on earth, these same people criticised him. When he cast out demons, they said he used the power of Beelzebul, so I have no intention of stopping. They are rather motivating me."

He said, "After all, this is my personal ministry, I am ministering to the people of God as they are doing, so, they should leave me to do the work of God."