Blakk Rasta Invades South Africa On The Way To Timbuktu 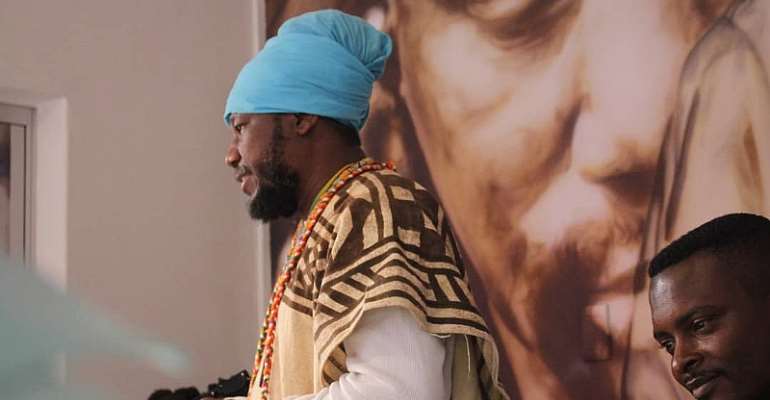 Blakk Rasta is way beyond a household name in Ghana having indelibly left footprints in the field of conscious, quality entertainment, African history, and Pan Africanism.

On Thursday, the Kuchoko legend was in South Africa to launch his sophomore Timbuktu By Road album which has been well-received in Ghana since its release in November.

Track after track, he introduced every song on the live-recorded music as the audience nodded admiringly.

The audience was overwhelmed by the depth of knowledge Blakk Rasta exuded. He talked about the album and veered into politics and African history.

"Blakk Rasta is a huge mass of positivity," the CEO of Sheer Publishing Africa David said as he could not hide his admiration. "We ventured into Ghana in 2010 and 9 years from then, we are not working in almost every country in Africa. Ghana has been so great a blessing and Blakk Rasta's album will certainly be a big trend in South Africa and the rest of Africa and the world."

A question and answer segment rounded up the memorable press release of Timbuktu By Road after which the media was served Ghana Jollof rice which they obviously enjoyed with a lot tasting the Ghanaian delicacy for the first time.

Blakk Rasta spent another one hour interacting with the media and taking photos has been so visibly excited by this great landmark.

Timbuktu By Road is Blakk Rasta's 10th studio album of 32 songs carefully produced and mastered into something bigger than an album - a journal. It is distributed around the world on all digital platforms including iTunes, Apple Music et cetera.