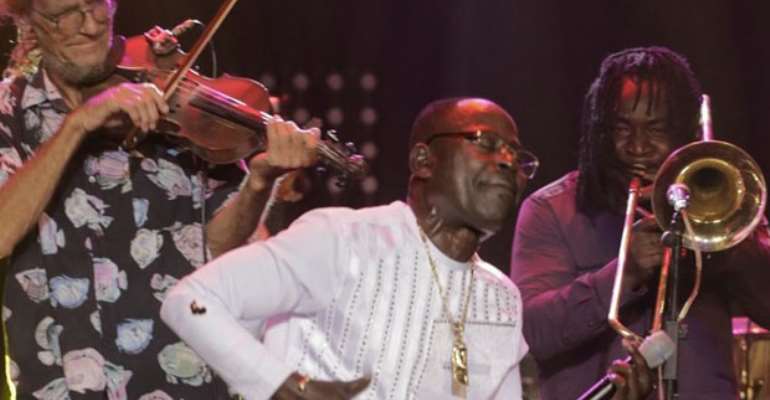 It was organised by Slip Entertainment to celebrate this year's edition of the annual Farmers’ Day celebration.

The event witnessed historic performances from artistes such as Kuami Eugene, Rex Omar, Kidi, Samini, Abrantie Amakye Dede, Kyekyeku Band, among others, who thrilled patrons with their with back-to-back hits.

The show kicked off with brilliant performance from the members of the Kyekyeku Band. They captivated the audience with their popular songs.

Kuami Eugene, who took over from the Kyekyeku Band, also delighted fans with most of his hit songs.

Some of his popular songs he performed at the event were 'Angela', 'Wish Me Well', 'Ohemaa', 'Never Carry Last' and his current 'Obiaato'.

Kidi also entertained patrons with songs like 'Sugar Daddy', 'Say You Love Me', 'Thunder' and 'Adiepena'.

Rex Omar also held the patrons spellbound with his songs.

Dancehall artiste Samini performed some of his popular hit songs like 'My Own',' Odo', 'Samini Music', among others.

Highlife legend Abrantie Amakye Dede, the last to perform, also gave a good account of himself during his performance on stage.

Backed by his High Kings Band, the 'Iron Boy' hitmaker entertained his fans with songs like 'Odo Da Baabi', 'Akoko Bebon', 'Odo Handkerchief' and a host of others.

The event also witnessed performances from surprised artistes such as T.Blaze, Ex-Doe and Bright of Buk Bak, who treated fans with their various old school hiplife songs.

Shatta Michy also made an appearance as an MC together with Hitz FM‘s Merqury Quaye.