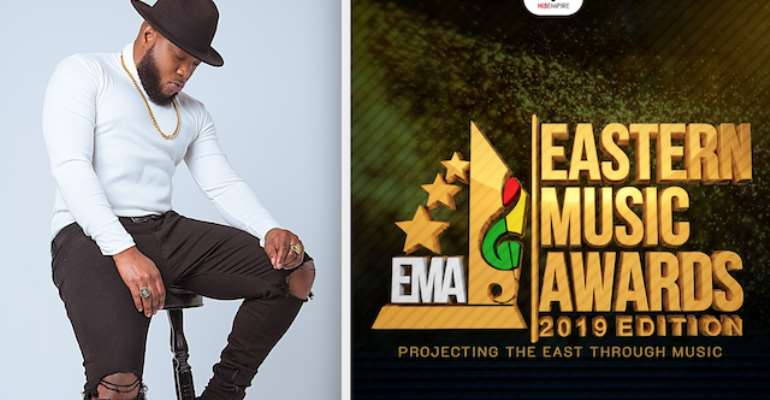 Julian Asiedu aka Jagonzy after winning Promoter of the Year award at the 2019 edition of the Eastern Music Awards organized by Hi5 Production/Empire is already busy working on his signature event dubbed ‘All Black Invasion’ party in four different cities in Ghana.

Outstanding and hardworking artistes within the entertainment and event promotion and management circles of the Eastern Region of Ghana were first honored and recognized for the impact on the industry in 2017 when the maiden edition of Eastern Music Awards was held.

The US-based event promoter and YouTube comedian said to TheAfricanDream.net “starting January 2020 we are going to be busy with the ‘All Black Invasion’ parties by the Shutdown Franchise which will be touring Ghana extensively. This award from Eastern Music Awards tells you how much effort we put into our work, which is why I want to thank the fans for their support and loyalty…“

“The main focus of these parties is to celebrate back love while welcoming everyone into a new year through music and dance, connecting with upcoming and mainstream artists, and networking on better ways to work together and also build on their crafts,” Julian said.

Some of the destinations lined up on the schedule of the ‘All Black Invasion‘ tour in Ghana are Fizzles Platinum Night Club of Dansoman Estate in Ghana’s capital city Accra on January 11, 2020. This will be followed by the Suhum Community Center event in the Eastern Region of Ghana on January 18, 2020.

Two weeks later the party train moves into Ghana’s Ashanti regional capital of Kumasi on February 1 at the Ol’Lady Sports Bar and Lounge. Climaxing the ‘All Black Invasion‘ party is going to be the 2020 Valentine’s Day event at the Casa Bar and Grill located opposite Bedtime Hotel in Koforidua, the capital of Ghana’s Eastern Region.

All the events respectively begin at 9 PM, more information on tickets, sponsorship and partnership are available by emailing [email protected] or visiting the official Shutdown Ghana Facebook page at www.facebook.com/shutdown.ghana for updates.

Jagonzy told TheAfricanDream.net that the future goal for the Shutdown Franchise in Ghana is to connect all the regions under one umbrella and share the rich Ghanaian culture through entertainment.

He revealed that “I am working on my first music project which features surprising upcoming stars from Ghana’s Eastern region. This album will shine some light on the hidden talents in the region. I will also use my platforms to push these talents outside the Ghana so they can have a taste of what it feels like to cross borders, this is why winning Promoter of the Year award couldn’t have come at a better time for me.“

This year Eastern Music Awards happened December 7 at the Koforidua Center for National Culture. For the full list of winners from last weekend’s event visit the official event website at www.easternmusicawards.com