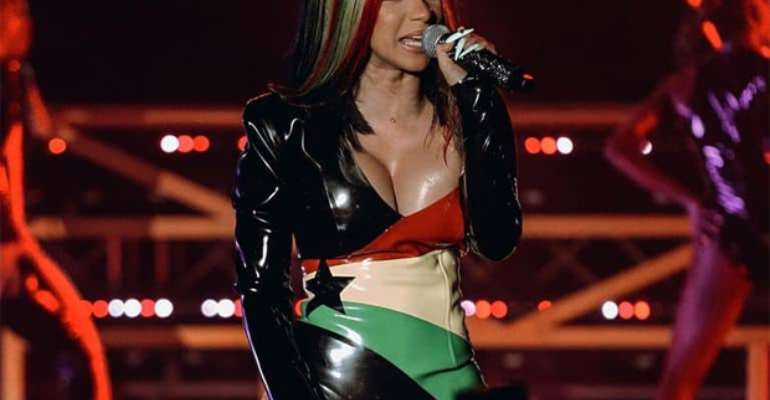 American songstress and rapper Cardi B has showered praises on Ghana for being a country worth staying in.

This was after the New York City-based songwriter, actress and television personality had snubbed some Ghanaian ‘celebrities’ who had thronged her hotel to have a meet-and-greet session with her.

Some celebrities thronged the Kempinski Hotel in Accra to interact with the star – real name, Belcalis Marlenis Almánzar – who was billed to perform at the Livespot X Festival at the Accra Sports Stadium Sunday night.

But the situation got quite tense when Cardi B did not turn up for the event.

In their anger, some of them took to social media to express their dissatisfaction with the development and condemned the rapper, who is also an actress, for her behaviour.

According to them, Cardi B was eating khebab at the hotel's poolside while they stood in the basement of the hotel hoping to meet her, a situation which got social media reacting hilariously.

However, after the unfortunate incident, Cardi B – who could not hide her joy about how it is worth living in Ghana, in an Instagram video which has since gone viral – expressed her happiness for coming to the country.

Bestowing praises on Ghana in the video, she also said that Ghana is a country one could come to for his/her honeymoon.

“I came here to make good time, meet good people, and this country is real fucking pretty. This country real here, Ghana is the place you wanna go to for your honeymoon. It's just mad beautiful,” she indicated.

Known for hit songs like 'Bodak Yellow', 'I Like It' and 'Girls Like You', Cardi B arrived in Ghana ahead of her Livespot X Festival performance slated for the Accra Sports Stadium in the later hours of Sunday, December 8, 2019.

The concert which had an array of Ghanaian stars billed to perform alongside her on the night was heralded by a series of events.

Controversies
Many music fans left the venue rather disappointed, partly because some of the big artistes advertised for the show didn’t show up on stage.

Two of Ghana's biggest artistes ‒ Sarkodie and Shatta Wale ‒ as well as Nigeria's Tiwa Savage and Patoranking were part of the artistes who didn’t perform.

Patronage was also below expectation of an international event like the Livespot X Festival. The event was saddled with power cuts during performances and long delays before artistes came on stage.

Ahead of the concert on Sunday, Cardi B was caught on the wrong side of events with some Ghanaian celebrities.

The celebrities who went to Kempinski Hotel in Accra Sunday afternoon for a supposed Cardi B meet-and-greet session were left in shock when the American pop star failed to show up.

Celebrities like Sandra Ankobiah, Lydia Forson, Afia Schwarzenegger, Efia Odo, Salma Mumin, Moesha, Akuapem Poloo, Hajia4real, Victoria Lebene, Becca, Sister Derby and a host of others were reportedly invited by the organisers of the event for the said meet-and-greet. Unfortunately, they spent more than five hours waiting for Cardi B, who was then busy at the Kempinski poolside eating her khebab.

Some of the celebrities took to their social media platform to register their disappointment.

“I am really hurt. I am so so disappointed. You know I was officially invited alongside with other celebrities to come and have a meet and greet with Cardi B but guess what? The organizers didn't even let her show up, I came to the pool side and where she was chewing khebab. Yeah, it's so embarrassing…,” Hajia4real said in a viral video.

But in a reaction, Cardi B said she wasn’t informed by the organisers about the meet-and-greet.

“’I didn’t really know that I had a meet and greet. Not only that, you know while I was in the hotel eating my shrimp? No lie like 10 minutes later, my stomach started to attack me. You know I’ve been having problems with my stomach for like a whole week,” she said in an Instagram video.

Despite missing her initial meet-and-greet, she appeared to have made up for it and appeared to do it later in the evening with a section of the Ghanaian media.

Later Sunday night, the mother-of-one gave a great performance to the delight of music fans who attended the show. She was dressed in the colours of the flag of Ghana.

However, that didn’t stop disappointed fans from complaining about the concert while some of them threw plastic objects on stage at a point. Among Ghanaian artistes who performed were Guru, Medikal, Eno, Becca and Kofi Mole. Unfortunately again, the lights went out during Guru's performance.