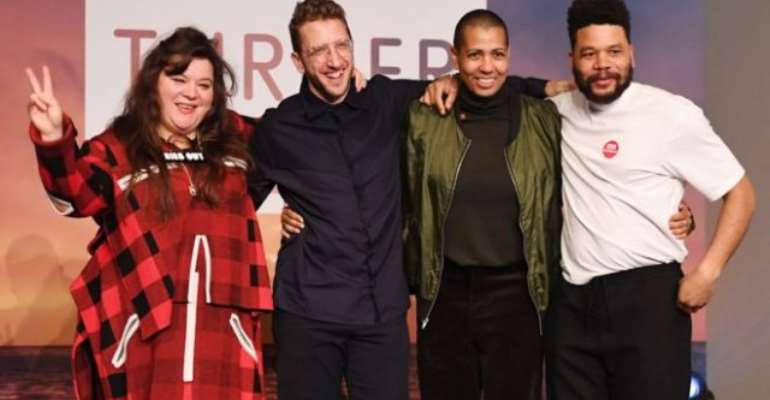 The four artists nominated for the 2019 Turner Prize will share this year's award after urging the judges not to choose any of them as a single winner.

Lawrence Abu Hamdan, Helen Cammock, Tai Shani and Oscar Murillo got together to write to the prestigious prize's panel.

They said they wanted to make a "collective statement" at a time when there was "already so much that divides and isolates people and communities".

The judges agreed and revealed the move at Tuesday's ceremony in Margate, Kent.

The Turner Prize is Britain's most high-profile contemporary art award. The quartet will share the £40,000 prize money.

The art world had gathered at the town's Dreamland amusement park to find out who had won, but even for an award once known for its shock value, the four-way split was unexpected.

Attendees stood and cheered as Vogue magazine editor Edward Enninful opened the envelope and was surprised to find a statement about all four artists rather than the name of just one.

"Here's something quite extraordinary," he said. "At a time of political division in Britain and conflict in much of the world, the artists wanted to use the occasion of the Turner Prize to make a strong statement of community and solidarity and have formed themselves into a collective."

Oscar Murillo with his art in Margate
This year's nominated works included Murillo's congregation of human effigies staring at a black curtain covering a window overlooking the sea; and "audio investigator" Abu Hamdan's sound effects, recreating the noise inside a notorious Syrian prison. They were the pre-ceremony favourites.

Shani presented a brightly-coloured feminist fantasy world "beyond patriarchal limits"; while Cammock made a film commemorating the role of women at the start of the Northern Irish Troubles in the late 1960s.

In their letter to the judges, the quartet said they all made art "about social and political issues and contexts we believe are of great importance and urgency".

They continued: "The politics we deal with differ greatly, and for us it would feel problematic if they were pitted against each other, with the implication that one was more important, significant or more worthy of attention than the others."

After the announcement, Cammock read a joint statement saying their work was "incompatible with the competition format, whose tendency is to divide and to individualise".

They said they wanted to speak out in "an era marked by the rise of the right and the renewal of fascism in an era of the Conservatives' hostile environment that has paradoxically made each of us and many of our friends and family again increasingly unwelcome in Britain".

They added: "Isolation and exclusion are the weapons of this hostile environment. It is this we seek to stand against by making this symbolic gesture of cohesion."

Tai Shani with her nominated installation
The jury unanimously agreed to allow them to share the prize. "We are honoured to be supporting this bold statement of solidarity and collaboration in these divided times," they said. "Their symbolic act reflects the political and social poetics that we admire and value in their work."

Tate Britain director Alex Farquharson, who chaired the judges, said: "In coming together and presenting themselves as a group, this year's nominated artists certainly gave the jury a lot to think about.

"But it is very much in the spirit of these artists' work to challenge convention, to resist polarised world views, and to champion other voices. The jury all felt that this made the collective a worthy winner of the Turner Prize." 'The upset to end them all', or 'virtue signalling'?

Reacting to the news of the shared prize, Adrian Searle in The Guardian wrote: "'Good for them!' - subverting the Turner prize is what artists are meant to do".

"Losers have sulked and even attacked people with gladioli. But the four shortlisted artists' decision to share this year's winnings could be the upset to end them all," said their writer Adrian Searle.

The Independent declared: "The Turner Prize puts itself out of business by allowing the artists to award the prize to themselves."

"The four nominees asked to share this year's prize - but robbing the judges and the public of the opportunity to scrutinise and compare their work hurts the artists too," wrote Mark Hudson.

"Is the baffling Turner Prize 2019 result just a virtue signal for the snowflake era?" asked Alastair Sooke in The Telegraph .

Twitter user Jamie Byng posted : "What a beautiful and genuine act of solidarity. I hope this inspires others to think and act similarly".

Writer Musa Okwonga agreed, adding the "only true opponents" to artists are "the blank canvas".

Art critic Andrew Russell was less enthusiastic about all four artists "asking for a participation trophy!", as he put it.

No winners or losers?
Analysis by BBC arts editor Will Gompertz
The decision to award the Turner Prize to all four nominees collectively was not made on the spur of the moment. The idea developed in the autumn when the artists first met in Margate for the Turner Prize exhibition opening.

It was discussed within the Tate (the ultimate overseer of the prize), led by Alex Farquharson. The proposal gave pause for thought, reservations were expressed, followed by the decision to put the artists' proposal to the Turner Prize jury.

The jury's decision to acquiesce to the artists' request sets a precedent which may well complicate matters for future juries, and possibly, the prize itself.

The fact is a lot of the artists who accept the invitation to take part in the Turner Prize (some refuse) do so with a nagging concern about its basic conceit: a competition to choose a winner, a best in class. Nominees can see it as a simplistic, reductive notion, which sits uncomfortably. In the past they've held their nose and got on with it. I wonder how many will in the future.

Maybe annual awards like the Turner Prize and the Booker Prize, which also didn't have a single winner this year, are reaching their sell-by date: an anachronism from a bygone binary age of winners and losers.

Almost 95,000 people have visited an exhibition of the shortlisted works since it opened in September at the Turner Contemporary gallery in Margate. The exhibition runs until 12 January.

Three years ago , Turner winner Helen Marten pledged to share the prize money with her fellow nominees - three weeks after doing the same with her winnings from the inaugural Hepworth Prize.

And earlier this year, the Booker Prize was split between two winners - Margaret Atwood and Bernardine Evaristo - after the judges refused to select a single victor.