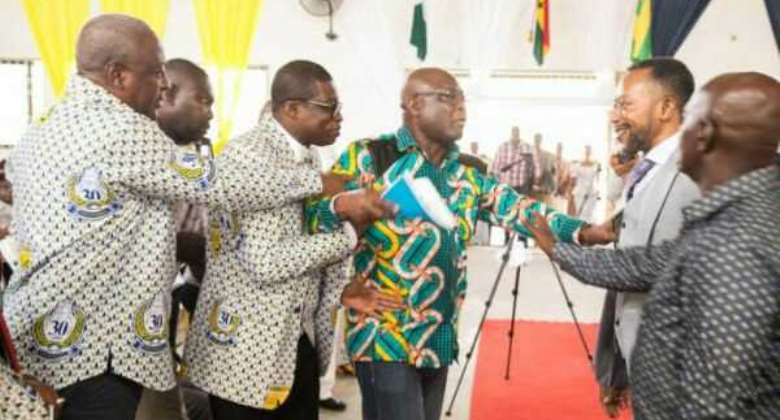 The Bono Youth Wing of the National Democratic Congress (NDC) has sent out a strong warning to the founder and leader of Glorious Word and Power Ministry, Rev. Owusu Bempah after he tried to shake hands with the former president John Dramani Mahama at Holy Ghost Revival Center of the Assemblies of God Church, South Odorkor, Accra when they had been invited by the Church to grace their 30th Anniversary.

The incident happened when Rev Bempah, who had to leave earlier because he had to go and preach at his own church, was asked by the Host Pastor to exchange pleasantries with the guests who were present.

There was a near-clash after Rev. Bempah shook hands with Mr Mahama. He requested to have a word with the NDC flagbearer but Mahama’s bodyguard refused which triggered a brief altercation. After about five minutes of disruption, calm was restored.

In a press release forwarded exclusively to HotfmGhana.com, the Bono Youth Wing congratulated the former president’s aide for his timely intervention in averting the ‘evil plans’ of their enemies.

They said that anyone who tries any evil agenda against their flagbearer, he will be disappointed.

They also said that the New Patriotic Party (NPP) had an evil agenda to carry out through Rev. Owusu Bempah because the month of December is a crucial one in the history of Ghana.

Read the full statement below:
BONO REGIONAL YOUTH WING TO PRESENT A HE-GOAT TO UNCLE JAMES FOR PREVENTING OWUSU BEMPA FROM GREETING OUR JM.

On behalf of the Regional Youth Wing, I write to thank uncle James the bodyguard of our President John Dramani Mahama for preventing the man called Owusu Bempah from greeting our President.

We were told Owusu Bempah wasn’t officially invited to the said program but went there to get the opportunity to shake hands with JM to carry out his evil spiritual agenda.

If he had succeeded 2020 would’ve been another huge battle for the NDC.

From a reliable source, we are told people who sent Owusu Bempah on that mission were disappointed because it was to seal their evil agenda for the year since today is December 1st which is very significant on their calendar since Elections will be held next year December.

The presentation will be done on an agreed date to be discussed with Uncle James.

Gov’t to set up 5-member committee to lead extensive stakeho...
33 minutes ago