4 Reasons Why You Should Be Watching Watchmen 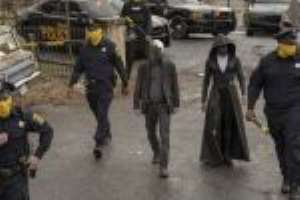 HBO released their brand new series, Watchmen, on October 20th, 2019. Currently streaming on Showmax, the superhero show is already racking up great reviews, with the number one spot on IMDB’s Most Popular TV list and a critics rating of 94% on Rotten Tomatoes.

Starring 2019 Oscar winner Regina King, Watchmen is based on the original DC Comics limited series of the same name.

For the DC Comics uninitiated, the original Watchmen featured an alternate history where superheroes emerged in the 1940s and 1960s and their presence changed history so that the United States won the Vietnam War and the Watergate break-in was never exposed. The story centres around a group of superheroes in 1985 who had been forced into retirement a decade before, and are now called together to investigate the murder of one of theirs.

The 2009 Watchmen movie is available for streaming on Showmax.

HBO’s 2019 Watchmen reboot maintains the alternate history format and kicks off 34 years after the original. The show opens in September, 2019 and this time focuses on racial tensions in Tulsa, Oklahoma, where the police are forced to hide their identities and are supported by vigilantes, following a previous attack on them by white supremacist group the Seventh Kavalry. Now the police are under attack again. After her friend and superior, Chief Judd Crawford (Don Johnson), is lynched, Detective Angela Abar (King), a vigilante known as Sister Night, investigates the lynching and discovers many secrets…

Damon Lindelof, who created Watchmen for HBO, likened the series to a "remix" of the comics. He also stated that, rather than a reboot, he wanted to introduce new characters and conflicts that create a new story within the Watchmen continuity.

Watchmen has been described as “the perfect superhero story for our tattered times” by The Guardian UK. Here are four reasons why it should be on your radar:

2. It’s from the creator of Lost and The Leftovers

Show creator Damon Lindelof has an impressive resume. He was co-creator and showrunner of the hit show Lost, which won numerous awards, including the 2005 Emmy for Outstanding Drama Series, the Golden Globe for Best Drama in 2006, and a Screen Actors Guild Award for Outstanding Ensemble in a Drama Series. According to Wikipedia, users of IMDBPro gave Lost the highest average ranking for any television series during the first ten years of the website's operation. Lindelof also served as co-creator of The Leftovers, which equally garnered critical applause and was ranked as the best TV series of 2017, according to Metacritic.

3. It’s a superhero show with a twist
Watchmen is unlike the average comic superhero movie or series: the lead character happens to be a black woman; superheroes are outlawed, not celebrated; and the show tackles contemporary social issues headlong, tapping into real life historical references, including the 1921 Tulsa attacks and even the more recent 2016 police shooting of unarmed father, Terence Crutcher, while maintaining the alternative history format of the original Watchmen.

4. It’s socially consciousness
From the get-go, we see that Watchmen is not shy about tackling social issues, specifically racism. The show opens with the Tulsa race riot of 1921 when mobs of white residents attacked black residents and businesses of the Greenwood District in Tulsa, Oklahoma. Often described as the single worst incident of racial violence in American history, the attack, carried out on the ground and from private aircraft, left 36 dead and about 800 people injured, according to Wikipedia. It also destroyed more than 35 square blocks of the district, which at that time was the wealthiest black community in the United States, known as "Black Wall Street". The show also goes on to explore racial tensions between white supremacist group, the Seventh Kavalry, and the police force.

According to Vox, Lindelof has talked at press conferences about how he wanted to match the world of his show to the biggest real-world problems of today, which he sees as the rise of white nationalism and fascism.

Writing for Indiewire, Ben Travers said, “Watchmen is here to shake you up; to stimulate new discussions about age-old issues; to challenge preconceived notions by framing them from new perspectives.”

More from Movie News
ModernGhana Links
Age and childbearing have taught me not to play romantic roles in movies anymore — Mercy Johnson
Support the movie industry as we support yours — Lydia Forson to Ghanaian Musicians
'For the sake of my career, you dare not quit acting' — Wayoosi to godfather Agya Koo
TOP STORIES