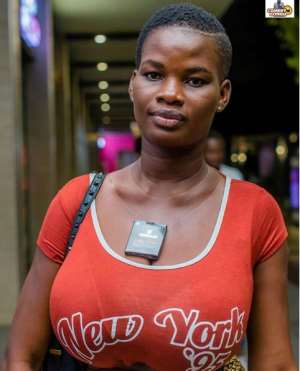 The queen of Instagram and the most regarded celebrity as the model with the largest and most massive melons in Ghana has hit the grounds running with a sumptuous interview granted in Kumasi based radio station "Price FM" on a program dubbed Oman Mpuntuo show hosted by the Boss General (BG).

Pamela as known by many speaking on girl Child empowerment interview with the Ashanti finest and young political show host ' Eric Asare Murphy, popularly called the Boss General, outlined the need for the Girl Child to be equipped in skills or engaged in petty trading in order not to be dependent on men.

She stated, most young ladies are into slay queening because of peer pressure and the desire to live a luxurious life style. She stressed though she is of the view that, slay queening is not a bad practice provided that you are a well to do young lady and can afford everything within your means without being liability on other people.

She, therefore, advised her fellow young ladies to take control of their life and avoid chasing men for their daily meal and luxurious life styles.

Touching on the number of young ladies been killed here and there as a results of being slay queens, she attributed to the expensive life style some girls are living which their peers find it difficult to live and resort into prostitution, and being killed by scammers.

She is of the view that the gender ministry and for that matter, the government has failed the Ghanaian Young lady because of inadequate job employment, though the Akuffo Addo administration is not doing enough but it's better than those days when dumsor was the other of the day.

she has charged the NPP led administration to create more jobs for the youths, especially the Girl Child, and to train the girl Child to acquire hand-on skills if her education level is below standard.

The front-heavy melons model, when being pushed to the wall by the host, the Boss General to choose between which party she will be voting for if elections were to be held today, did not hesitate to openly wow the numerous listeners that, the obvious choice is Nana Akuffo Addo led NPP.

She opined though the free SHS has some challenges that need to be addressed as a matter of urgent, it doesn't take the good policy Ghanaians are enjoying from reaching it prime target, though she is of the view the longevity of the vacation leave much to be desired, she charged the young ladies enjoying the free SHS to stay away from sex to avoid any unwanted pregnancy.

She has charged the government to look into the creative art industry and honour his promises by building cinemas, creative arts centers through out the country to get the industry booming.

Nana promises too much, the least chance he gets, he give promise, the promises are too many , he should stop promising if he can't fulfilled them, she quizzed.

Eric Asare Murphy, known as the Boss General on Oman Mpuntuo program on Price FM 107.3 went beyond the agenda of the day to ask weather Pamela was sleeping around and is dating popular actor Kofi Ajololo, of which she denied ever having any body contact with Ajololo.

Nana Kwame is my boyfriend, Ajololo is like a father, we've good relationship as father and daughter and nothing intimate, she said.

The Kenyan born Ghanaian model is in the Ashanti Region to shoot Television series.

More from Exclusive News
ModernGhana Links
My costume can pay your rent, buy a house and a car — Stonebwoy brags
Berla Mundi would've sponsored the wedding if Usher had accepted her proposal — Bongo Ideas
Let's have our wedding here before you go — Berla Mundi throws marriage proposal at Usher
TOP STORIES