Rahim Banda Calls On Bawumia, Others 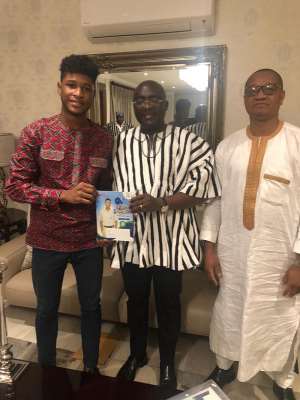 Ghanaian actor and free Senior High School Ambassador Rahim Banda together with his “Back to School Foundation team have paid a courtesy call on Vice President Dr. Mahamudu Bawumia, Minister of Gender, Education Minister and his deputy.

The actor has been embarking on the Back To school Project with aims at helping to kick out streetism and putting them back to school.

Rahim Banda said he decided to use the month of October to pay a courtesy call on leadership within the country who matter as far as education is concerned.

He added that so far, they have been able to meet all those they booked to meet apart from the Chief of Staff whom they are hopeful of meeting soon.

Sharing some of the experiences, the actor said that he was highly motivated by all the people he met.

He revealed that the Minister of Education, Honorable Matthew Opoku Prempeh advised that the youth and Education should not be crossed through political lines.

“It is satisfactory enough to know that the powers that be have their eye on us”, he said.