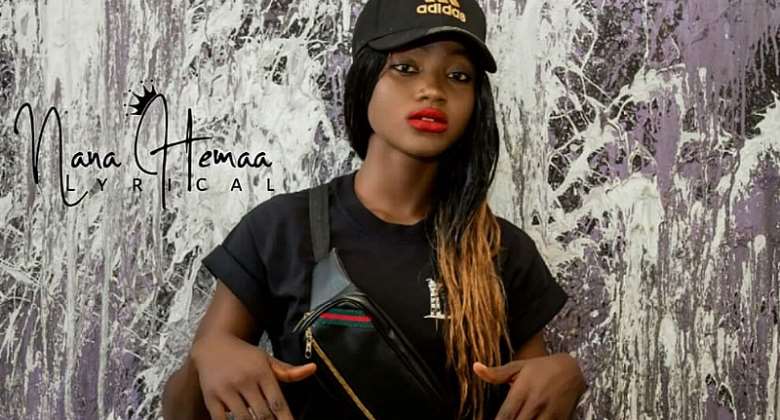 Agyeman Dorothy popularly known in showbiz as NANA HEMAA LYRICAL started her music career at the age of 7, where she used to stand in front of her Church congregational to sing at the New Tafo Dichemso Seventh Day Adventist Church in Kumasi.

She was also the quarter leader where she used to lead a group of singers to sing songs during church services.

Nana Hemaa was also part of a musical band known as Singing band in Tanoso Adventist Church also located in Kumasi something that helps nurture her music talent which was her start off point for her music development.

In the year 2014, Nana gained admission to the Adventist Girls Senior High School located I Ntonso in the Ashanti Region where something interesting happened to her, that revealed her true talent.

In her first year, there was an Entertainment show tagged Fresher's Night, which was organized for first-year student's to welcome them to school and help them showcase their God-given talents

Nana Hemaa Lyrical who was a great and groomed singer was forced by a senior was the school's Entertainment prefect to represent her house as a female rapper.

The show was supposed to happen on Saturday and she was only informed on Friday to prepare herself for a rap performance on Saturday.

Well, this looked like a very tedious task to her but never relaxed.

She quickly began some research on some Ghanaian top rappers where she realized Sarkodie was the best rapper among most of the rappers then.

Nana said "I picked R2bees instrumental 'I dey mad oooo' and rapped with it at the event, and was amazed how the students were excited, especially my house members, including our housemistress" since that day Nana Hemaa Lyrical started working more on the rap and hip hop genre.

In the year 2016 Nana Hemaa left Adventist Girls Senior High School to Nkawie Senior High School, there also a day came where there was supposed to be An Awards Night for the first time in school, She went in for best female rapper category in the NSTS Awards, where she worked hard on Sarkodie's hardcore instrumental for his song titled Original" and created a rap with her school experiences that felt so awesome and amazing indeed .

The students voted for her massively to win the award as the best female rapper in NSTS.

This was when Nana Hemaa decided to adapt rap over singing a decision that got people to invite her for events, programs, and rap battles.

Nana Hemaa Lyrical have mounted many show stages some of which include:

In an interview at Kingdom FM, Nana Hemaa Lyrical made a revelation that she knows currently Eno Holds the throne for female rappers in GH and she intends grabbing that from her with a smile.