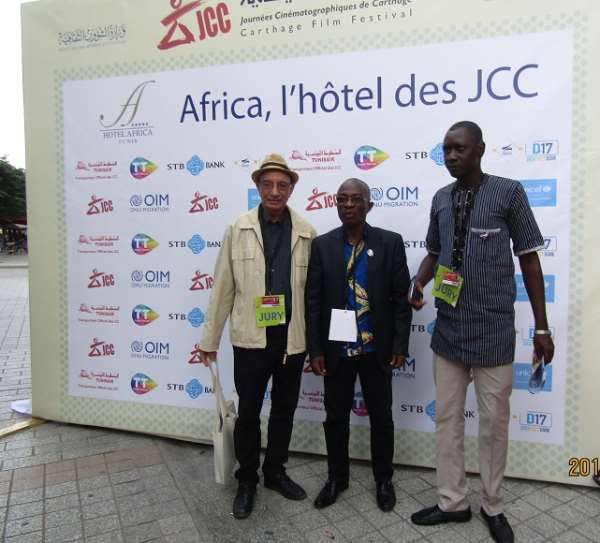 Mr Francis Ameyibor of the Ghana News Agency, is among the high profile international film critics, cinematography directors, producers, scriptwriters, and actors serving as Jury for the 2019 Carthage Film Festival in Tunis, Tunisia.

The Carthage Film Festival Jury has the tasked to select from several African and Arab films in the various sections for recognition and wards. Most of these Films have enjoyed great success with the public, professionals and film critics.

The three Parallel Juries were nominated by the International Federation of Film Critics (fIPRESCI) an association of national organizations of professional film critics and film journalists from around the world for "the promotion and development of film culture and for the safeguarding of professional interests."

The Federation of African Cinematographic Critics is a Member of the fIPRESCI.

The 15 member Grand Jury is headed by the French Senegalese Director Alain Gomis who will be surrounded by the Japanese filmmaker Koji Fukada, the Algerian actor Hassan Kachach, as well as the Tunisian director Mahmoud Ben Mahmoud, the Moroccan director Meryem Benm’Barek, the Zimbabwean filmmaker Tsitsi Dangarembg and the Lebanese director Yasmine Khlat.

The Documentary Jury is however presided over by the American Director Jerome Gary, who will work with the Congolese film critic Djia Mambu, the Cameroonian director and film critic Jean-Marie Téno, the Tunisian writer Director Mohamed Mediouni and the Egyptian filmmaker Mohamed Siam.

The First Feature Film Jury (Taher Cheriaa Awards) consists of 3 members headed by the Palestinian Swedish Producer and Director of the Malmo Arab Film Festival, Mouhamed Keblawi. At his side, the Tunisian actress and producer Anissa Daoud and the Rwandan filmmaker Joel Karekezi.

The official award list of the official competitions includes the following awards:

The Jury reserves itself the discretion to grant or not to grant any of the awards mentioned in section and the Jury may grant special merit awards. There are no tied awards in the awarding of all prizes (Tanits and other prizes).

Meanwhile after the great success of inviting South Asian and American cinemas as special guests, in the last two sessions, alongside African and Arab countries, the Carthage Film Festival 2019 continues this fruitful experience.

At the festival Nigeria will feature on behalf of Africa, Lebanon on behalf of the Arab region and Japan on behalf of Asia and Chile on behalf of Latin America, through this initiative, Carthage Film Festival tightens its African and Arab roots while remaining open to the world new cinemas.

The Carthage Film Festival created in 1966, to date is the oldest event of its kind still active in Africa. Initially biennial alternating with the Carthage Theatre Festival, it became annual in 2014.

A directing committee chaired by the Tunisian Ministry of Culture joined together with professionals of the cinema industry is in charge of the organization.

The Carthage Film Festival has been designed as a film festival engaged in the cause of African and Arab countries and enhancing the South cinema in general.

FixingTheCountry Movement to march in support of Akufo-Addo'...
47 minutes ago