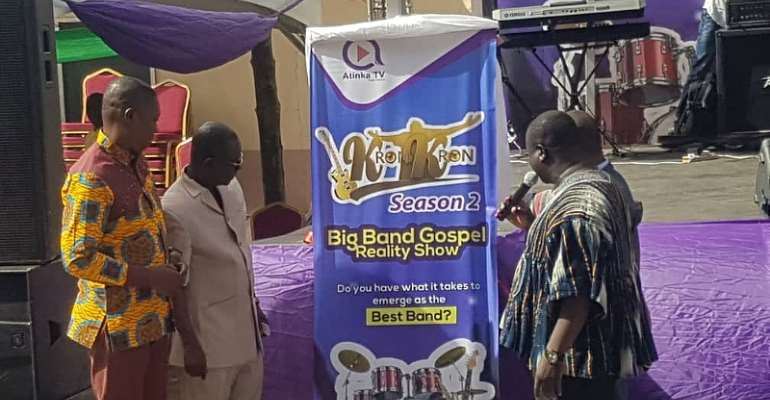 Kronkron which is a live television (TV) reality worship-centered competition that creates a platform for bands to compete among themselves in the area of Christian worship.

The Big Band Gospel reality show also seeks to groom talents in the Biblical/gospel music fraternity and help them grow as musicians and performers through training.

The Gospel reality show is also to reveal the truths about God in worship.

Speaking at the launch of the event at the forecourt of the Atinka Media Village (AMV) in Accra on Friday, the Managing Director of AMV, Mr. Albert Kwabena Dwumfour said, Kronkron season 2 is set to promote sanitation, particularly discourage the use of plastics which were the cause of many environmental problems.

"AMV's project 'Say No To Polybags' is aimed at protecting the environment by encouraging the use of paper bags instead of polybags; KronKron season 2 will serve as a rallying point to promote this agenda", he said.

He called on the general public to lend their support to the event to ensure its success.

He then encouraged all viewers of Atinka TV to expect the best and also stay tuned to the channel as the station was known for executing great reality shows.

Mr. Dwumfour used the opportunity to explain the rationale behind the reality contest and expressed his gratitude to the Executive Chairman of the Tobinco Group, Elder Samuel Amo Tobin, who according to him is the brain behind Kronkron big band reality show.

He noted that there were lots of talents in the gospel scene and he believed that the reality contest would encourage contestants to work hard towards achieving heights in the music Industry.

He added that “Arts and culture is the catalyst for growth in every country all over the world. If we make a mistake of not promoting the music industry, then the nation has no future”.

Announcing the most important aspect of the show, Mr. Dwumfour announced an automatic qualification for bands made up of persons living with disability to the eviction stage of the competition, saying this was in line with the AMV’s vision to create equal opportunity for all Ghanaians.

The launch was graced by Ministers of state, Head of Churches, groups of Kronkron Season one and Queens from Di Asa and some renowned Ghanaian gospel musicians.

ASEPA to sue Presidency for withholding info on petition for...
29 minutes ago