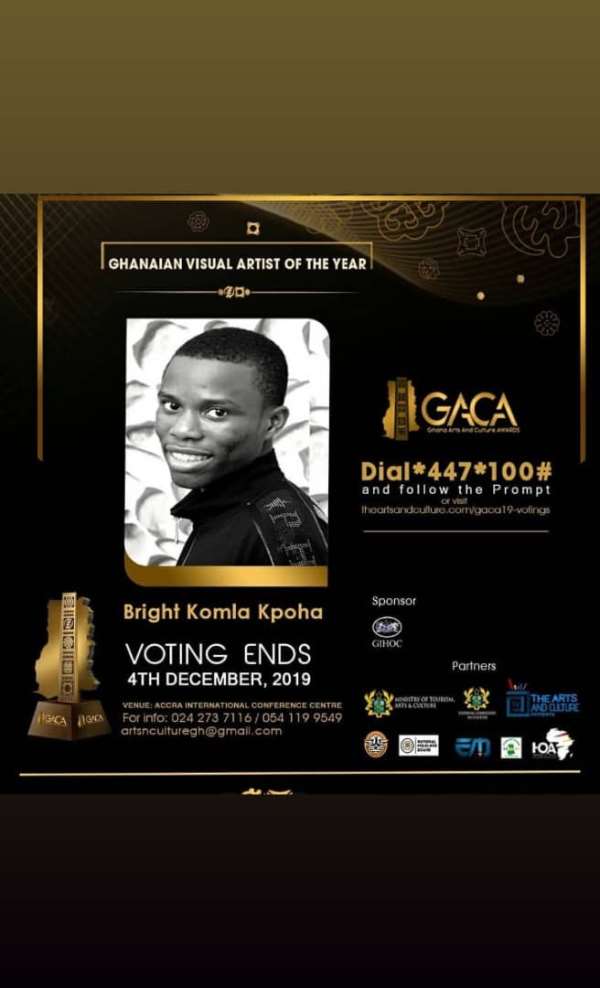 Young Ghanaian visual artist, Bright Komla Kpoha who is known for his unique style of putting pen and pencil to paper has earned a nomination in this year’s Ghana Arts and Culture Awards in the ‘Ghanaian Visual Artist of the Year’ category.

The artist who is artistically known as Realpen Pencil has a peculiar way of making arts appealing unlike the conventional approach to drawing, Bright Kpoha ‘Realpen pencil’, dramatize his drawing process, displaying gymnastics, dancing, jumping and other skills to transform his subject onto paper.

Currently, Realpen pencil is the World’s First Gymnastic Artist, this claim was recently endorsed by Google.

In the Ghana Arts and Culture Awards category, Realpen Pencil is with five other great visual artists, to vote for Realpen Pencil click on https://l.instagram.com/?u=https%3A%2F%2Ftheartsandculture.com%2Fgaca19-votings%2F&e=ATMXpY0sWW_oVLLe-iL8owkU2TUp_mWd58jIA9nOCGmWzAAOHP5jy4MCkfrmfb1RFZ-vzZxi . Voting end on December 4, 2019

About Bright Komla Kpoha
Bright Kpoha, artistically known as Realpen pencil , was born on March 24, 1998 at Akatsi in the Volta region of Ghana but grew up in Lome, Togo, where Realpen pencil lost his parents at the age of two. Realpen pencil, survived through entertaining his peers and adults in his neighborhood.

He Realpen pencil discovered his real talent at the age of seven, when he began drawing people with pens and pencils in a unique style, hence the nickname, ‘Realpen Pencil’.

According to him during the drawing process, Realpen pencil, “I connect my soul, heart, extra-eyes fixed and controllable invisible camera on the subject. I was adjudged the best of the year artist during the 50th independence anniversary celebration of the republic of Togo in 2010.

“I also took part in the National drawing competition in Togo, at the age of twelve , representing the Ecole Marie Auxiliatrice d’Ablogame and was the second best behind a 40 year old man. In 2012, I was invited by the Togolese president, Faure Essonzinna Gnassingbe following a beautiful portrait I made of him. Unfortunately, I could not see the president because he was meeting some foreign visitors."

After impressing the office staff of the president about his talent, but he was asked to redo the president’s portrait to remove red and yellow at the background which was political colors. Disappointed by this the young talented artist declined the second appointment at the presidency and decided to move on.

In 2013, Realpen pencil relocated to Ghana, his birth country with the hope of developing his talent and dream, but still found the ground very hard to break.

He pitched camp at the Accra mall, drawing people for survival. He also visits campuses, event centres and other major gatherings where he is always an instant toast of the people.

Realpen pencil has so far drawn the 100 Most influential celebrity woman in the world "Omotola Jalade Ekeinde,MFR" on the sage and became famous 29 March 2017, Sarkodie and some local and international celebrities (actors and actresses, musicians) and many people and still counting.