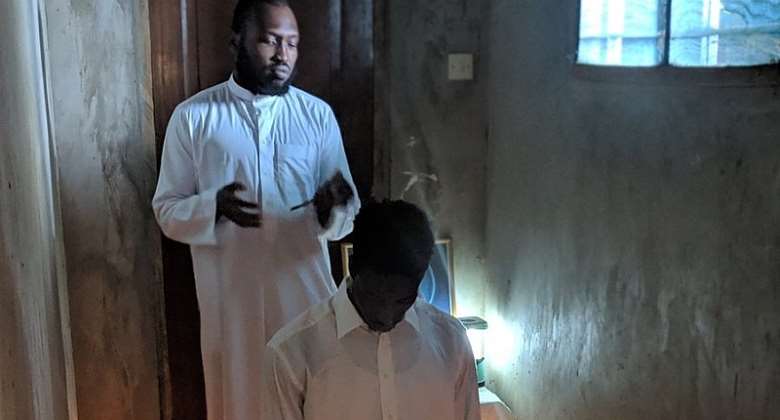 The minds behind 'Boys No Dey Cry', a short film that made a mark with some men because of its theme of toxic masculinity, did not set out to be a 12-minute therapy session. They only sought to start “an uncomfortable conversation.”

'Boys No Dey Cry' tells the story of Joojo (Papa Osei Akoto), a man who’s been unemployed for three years and contending with the strain of unfulfillment and family tensions, especially with his father. The bulk of the film takes place in a therapy session, where he is compelled to open up about his struggles.

I found the film to be unique in the way it wove in various levels of Ghanaian frustration. Aside from government failings that see our protagonist unemployed, family and religion offer little reprieve. His father and mother only seem to make the matter worse.

There was some apprehension when first time filmmaker, Albert Donkor, first run his idea for the film by co-writer of 2018's 'Lucky', Joewackle Kusi. To this point, Joewackle hadn't had the smoothest of interactions with fellow artists.

“I have really had a lot of creatives hit me up to work on projects with me but one real challenge for creatives in Ghana is we like the idea of working together than actually working together. So personally, for me, I wasn't entirely interested in the entire project,” he told me.

It was going to take a lot more than a surface proposal from Donkor to move him to work on the project that would eventually become ‘Boys No Dey Cry’. Thankfully Donkor had the extra layers that would draw in Joewackle. It had to do with not just the central theme and ideas that tackled mental health but also the sense of perspective.

The core idea of the film is filtered through a man cowed by the weight of a fraught relationship with his father and frustrated further by a dysfunctional society. It presented an opportunity for Joewackle, who recalled that he was going “through a lot” at the time, to use the project as a diary and an avenue to pour pieces of himself into the narrative. “I feel like, for every single frame, there is me in every single frame,” he said.

Donkor felt the same way, noting how he viewed the central character as “a representation of my friends and me.” And it wasn't just him. The two felt like shared experience from the all-male crew contributed to the authenticity of the story.

Joewackle may not have been unemployed for three years like the film’s subject, but the sense of frustration from professional stasis, which he related to, was the essence he was going for.

“At every point in time, every young person finds themselves in such a situation. If you are not unemployed you are probably not happy with your job and you just don't know exactly where your life is headed.”

I viewed the actor, Papa Osei Akoto as the bridge between the script and the direction. The film loses some bite without him delivering an affecting performance.

Papa Osei, a close friend to Donkor, was an easy choice to star in the film. Joewackle had also worked with him on ‘Lucky’ and was impressed with his range. He wrote the role for someone who was “super masculine” but “who was actually tuned with his emotions and willing and ready to accept the fact that he needs help.”

After being pitched the idea midway through 2018, and about four months of prep and getting into character for Papa Osei, the film was shot later that December.

Donkor had a specific wavelength he wanted his leading man to hit. “I needed him to be anti-social at the same time vulnerable. Not open up and at the same time wanting to. He nailed it perfectly.”

With the “perfect” subject in place, Donkor had had the final cog in his machine of empathy. He forces Joojo in our face and opts for handheld shots, which he favored for the more naturalistic feel it would bring.

“I like handheld shots for intimacy. [They are] more natural. You are able to centre and have a close up look on emotions. I needed people who were going through that phase to feel they were in that room, they were the ones sitting there. For them to say ‘wow this is me’,” Donkor explained.

Albert Donkor (L) and Andy Madjitey, his cinematographer on location during the filming of ‘Boys No Dey Cry’

Donkor says people did connect with the story and the central performance. I saw some commentary on social media that pointed to the fact that guys were aware of the social norms that keep them in a repressed state.

It is some of these socio-political realities that informed a bleak reading of ‘Boys No Dey Cry’ on my part. To me, Joojo's only option was to internalise his troubles. The film ends with him revealing he's been talking to himself the whole time and a sense of despair weighed heavy for me at the end of the film.

But like most writers, Joewackle seeks the best for his character and had a more hopeful direction as he penned a coda to 'Boys no Dey Cry'. Joojo's inner dialogue is only the first step in the healing process.

Going forward, these are the kinds of stories these two filmmakers hope to tell. They are currently in the development stages of a feature film, Donkor's first, which will start filming in Kumasi in 2020.

For those taking note, Donkor wants 'Boys No Dey Cry' to be the blueprint that sets him apart from the mainstream exploitation fare in Ghanaian cinema.

With their ambition and support from fellow filmmakers who sent in their critiques and admiration of the work, the film was a good stepping stone.

And as for fulfilment, that came from just connecting with an audience. “I had a lot of my own friends and strangers saying 'this is my story'. This, I feel is my reward,” Donkor said.