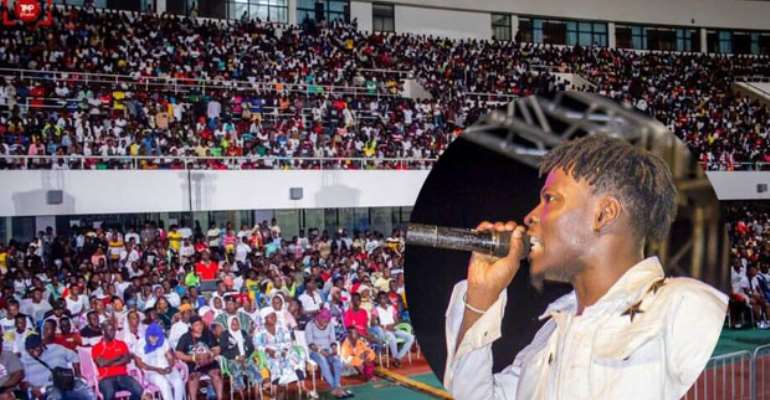 A scene from the event. INSET: Fancy Gadam

Fancy Gadam turned the entire Tamale Metropolis upside down last Saturday with an event dubbed 'Dream Album Launch & Concert', which was held at the at the Alhaji Aliu Mahama Sports Stadium.

The heavy rains could not stop thousands of music fans in and around Tamale from attending the show.

An ecstatic crowd made up of over 30,000 Ghanaian music fans from all walks of life, including students from some of the second cycle and tertiary institutions, thronged the venue to partake in the event.

The concert was an all-night affair which provided non-stop entertainment till the break of dawn.

The ‘Dream’ album launch and concert was set in motion with performances from some upcoming stars from Ghana.

It also witnessed a memorable performance from Fancy Gadam, who outdoored his fifth studio album on the night, as well as some fascinating performances from Kofi Mole, Rudebwoy, Fadilan, among many others.

When it got to the turn of Fancy Gadam, not only did he rock the stage with his hit tracks, but his delivery was extraordinary on that night.

Fancy Gadam performed some of his old hit songs and some new tracks from his current album.

Some of his popular songs her performed at the event were 'Turn Up', 'Concrete', 'Naayo Koomi,' 'We Dey Collect', 'Naawuni Yiko', 'Total Cheat', among others.

“Words cannot describe my feeling last Saturday especially with the heavy downpour, my fans showed me love and loyalty and I really appreciate everyone who came to the concert to support the Gadam Nation,” he told Ghana News Agency in an interview.

His 13-track album, which is available on various digital music platforms, featured artistes such as Stonebwoy, Kofi Kinataa, Kwesi Arthur, Kofi Mole, Mr. Eazi, among others.