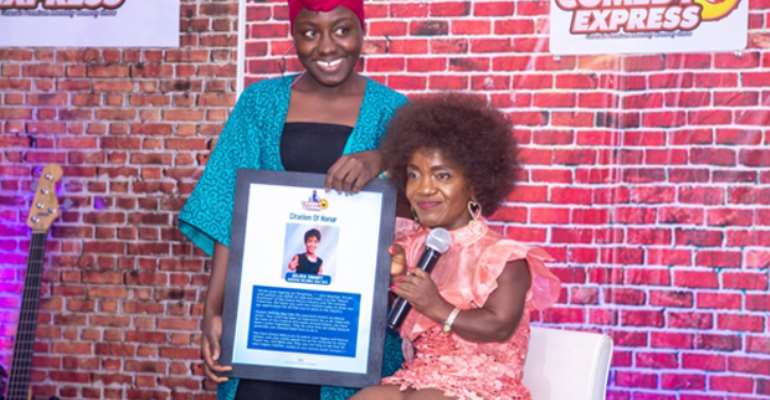 Adwoa Smart at the ceremony

This was at the 'Comedy Express' event organised by DKB and his friends at the SOHO Bar inside the Marina Mall in Accra.

The legendary comic actress has been in comedy for over 25 years. Her legacy captures the very reason why many females have risen and are rubbing shoulders with their male counterparts in the comedy industry.

The organisers of the event thought it was long overdue to celebrate the veteran when she is alive.

Adwoa has been in the film industry since 1984 when she was discovered by Grace Omaboe. She has since performed in a number of television dramas and stage productions for Obra and also featured in a number of films. These include 'It's Too Late 1 &2', 'Father & Son', 'Naomi', 'Yaa Asantewaa', 'Money Bag', 'Matters of The Heart', 'Judgement Day', 'Lucifer 1 & 2', among many others.

The event also paraded a number of female comedians at the ceremony dubbed 'Girls Kasa'.

Among performers were Shawkiya, Lamisi, Feli Nuna and Petrah, who made the evening a memorable one.

A prima facie determination as a pre-condition for removing ...
3 minutes ago