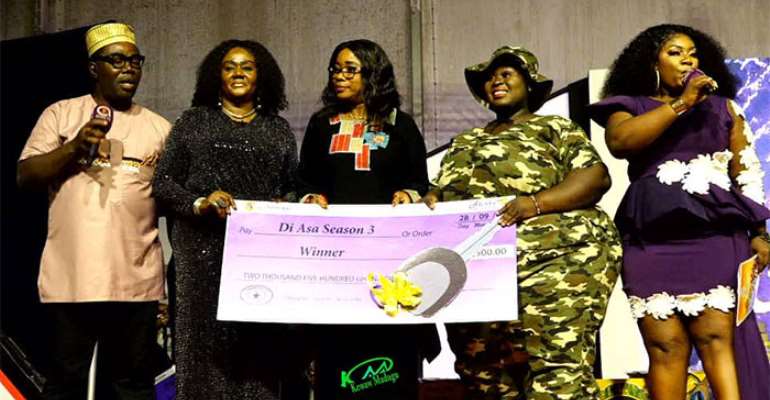 The grand finale was held at the Fantasy Dome inside the Ghana Trade Fair Centre on Saturday. Despite her weight, the biggest amongst all 47 contestants, she beat the rest to emerge the ultimate winner. PM displayed some good dance skills and also topped the voting chart.

As part of her prize package, she took home a brand new saloon car, a cash prize of GH¢2,500, a 32-inch TV presented by Diora Appliances, goodies from all the sponsors on Di Asa Season III and a sponsored trip to Dubai.

The two ministers gave PM $500 to support her shopping when she travels to Dubai as part of the winning package.

The second prize, which is a Kia truck, went to Valencia Kodjotse, who is known on stage as Gaza.

Aside the vehicle, she also received a cash prize of GH¢2,000, goodies from the sponsors and a sponsored trip to Dubai.

The third prize went to Charity Aquah, known on stage as Maafia. She also won a tricycle, a cash prize of GH¢2000, a sponsored trip to Dubai and other packages from the sponsors.

The three winners were also given certificate of participation.

However, all the other finalists were given a cash prize and packages from the sponsors of the show.

One of the judges, who is also a renowned Ghanaian musician, Akosua Agyapong, gave a thrilling performance at the Di Asa grand finale.

The Fantasy Dome, which had a 6000-seater capacity reservation for the show, was full on the night with vibrant supporters of all the contestants, especially PM, dignitaries including ministers, deputy ministers, representatives from the various ministries and state institutions, staff and management of subsidiary groups under the Tobinco Group of Companies, management and staff of the AMV and lovers of Di Asa.