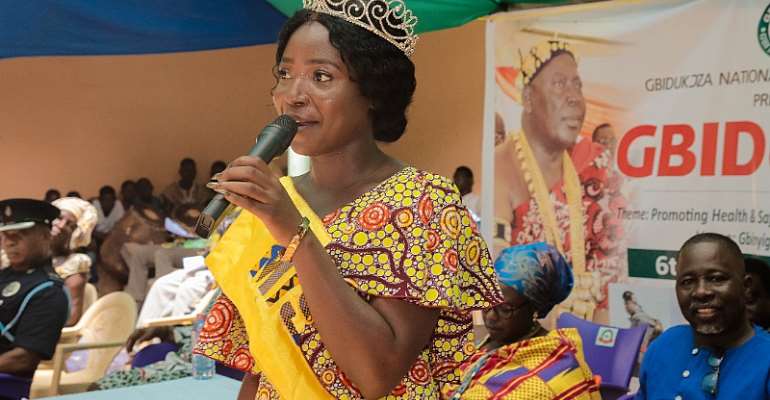 About a thousand children at Peki in the Volta Region are set to benefit from free healthcare under the National Health Insurance Scheme on Saturday, 5, October.

The exercise being championed by Beauty Queen, Florence Makafui Allavi, 23, with support from the National Health Insurance Scheme in the South Dayi District, would ensure that the beneficiaries benefited from free basic healthcare.

Ms. Allavi crowned the Miss Gbi during the 2018 Gbidukor festival of the Chiefs and people of Peki and Hohoe, said the pageant gave her the opportunity "to go out there to solicit support to help children access healthcare. I find it disheartening when children are denied basic healthcare because they are not registered on the National Health Insurance Scheme. So I am excited that we will get to register up to 1000 children in the Peki area."

The beauty Queen would also use her platform in getting women to undergo a Free Breast Care Education and Breast Cancer Screening in the Peki Community.

The 23 year old indicated a lack of knowledge on the subject as a motivating factor in embarking on the exercise.

She added that "I have witnessed cases that ended up at prayer camps because it was thought to be spiritual. So this is so very important, I hope future Queens will also focus on this area to ensure that knowledge on Breast Care and Breast cancer become a household thing within Gbidukor and by extension the country.”

2H City Connect, a Hohoe Based Youth Group and Gbidukor.

The two activities, set to take place on the 1911 Park in Peki Blengo forms part of Miss Allavi's projects as the reigning Miss Gbi who had already conducted similar exercise in Gbi (Hohoe), earlier in July.

The Pageant was instituted as part of the annual Gbidukor Festival (Gbidukorza) celebrations which was instituted some 24 years ago. Gbidukor (Gbi State) is made up of two traditional areas; Gbi (Hohoe) and Peki. Hohoe area is referred to as Gbidzigbe or Gbi North and Peki area is known as Gbinyigbe or Gbi South.

The 2019 Gbidukorza is scheduled to take place in Peki from Friday, 6th to Monday, 9th December, 2019 on the theme "Promoting Health and Safety Standards Our Shared Responsibility".

High Court shoot down Agordzo's application to travel
23 minutes ago

ASEPA to file RTI request for minutes of Justice Dotse-AG 'S...
23 minutes ago