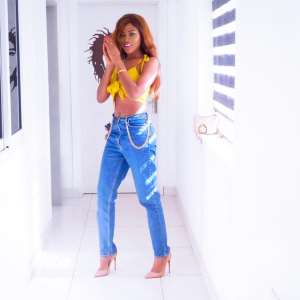 The “Away” hitmaker in the video was seen singing to the famous top-charting song “One Gal” which featured Richie Mensah.

According to Eazzy, the single was released 10 years ago when she was under Lynx Entertainment.

The singer looked very happy as she sang to the tune revealing she still loves the song as hasn’t forgotten any lyrics of the song.

Richie, on the other hand, was on the piano as he still got the playing skills for the song.

Eazzy has been telling us in a series of interviews, she and Richie of Lynx Entertainment are still good friends.

This video really looks true and great.
But now the question is will Eazzy still love to work with Richie Again although the two are still judges for MTN Hitmaker season 8.

Eazzy is currently promoting her new single “For The Where” which features Joey B.