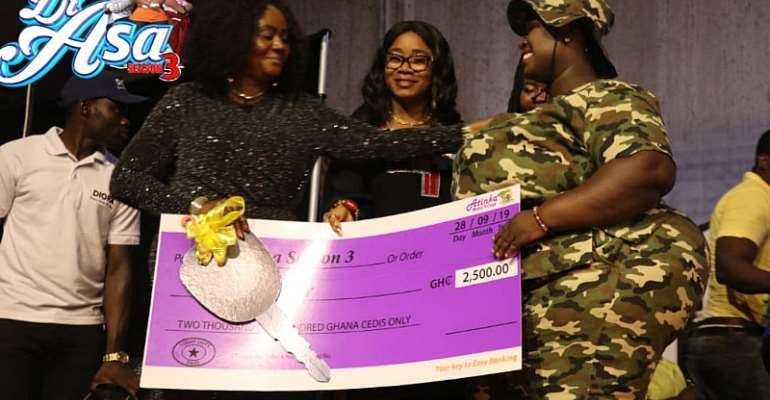 Precious Mensah known as PM has been crowned the winner of Di-Asa Season 3 grand finals which came off on Saturday, September 28, 2019, at the Fantasy Dome, Accra.

Interestingly, twenty-five (25) contestants made it to the grand finale, they opened the show with a dance performance.

The contestants wowed the crowd into their talent competition by showcasing their dancing skills.

The list was then narrowed to 5 contestants where PM won the hearts of many after a tiring four rounds of different genre of dances.

For her package, she took home a brand new saloon car, a cash prize of GHC2,500, a 32-inch T.V. presented by Diora Appliances, goodies from all the sponsors on Di Asa season three and a sponsored trip to Dubai.

The second prize, which is the ‘Abosey Okai Matcho’, went to Gaza with a cash prize of GHC2,000, goodies from the sponsors and will also enjoy a sponsored trip to Dubai.

Meanwhile, Maafia, who won the third prize received ‘Aboboyaa ‘, cash prize GHC2000 and other prizes from the sponsors as well as a fully sponsored trip to Dubai.

The event was also graced with the ministry of gender, children and social protection, Hon. Cynthia Morrison, some members of parliament, chiefs, queens, the media and friends, and families, etc.