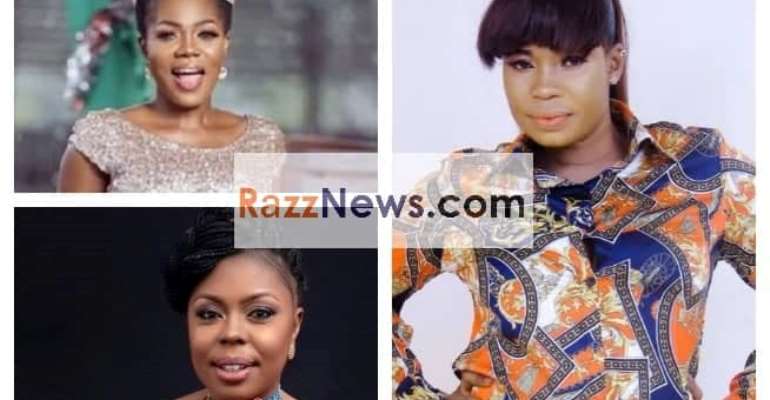 Popular Kumawood actress, Naana Brown has descended heavily on celebrated songstress Mzbel, and popular comedienne Afia Schwarzenegger over the ongoing rift between the Musician and the Comedienne.

In reaction to Afia's allegations , Mzbel explained that Afia Schwarzenegger doesn’t have a boyfriend and that she wouldn’t stoop too low to sleep with her man.

Mzbel further stated that she has massive respect for the father of her child which is why she has decided to keep her relationship life off social media. She then called her former best friend a dwarf.

However, in a viral video sighted by RazzNews.com, Kumawood actress Naana Brown who seems to know much about the one-time best friends has cautioned Afia Schwarzenegger to stop raining insults on the 16 Years hitmaker because both of them have the same lifestyle.

According to Naana Brown, Afia Schwarzenegger doesn’t have the moral right to dare Mzbel to reveal her baby daddy to Ghanaians since she has also not provided the name of the father of her two children.

“Afia Schwarzenegger, if you are daring Mzbel to reveal the name of the father of her son, both of you have the same lifestyle... I'm also daring you to reveal the name of your children’s father…the children you claim you gave birth to in Germany were actually born in Ashaiman…Do you even remember the man who impregnated you to give birth to those Fulani Children?”.Naana Brown said

Naana Brown, who is well-noted with Kumawood movies such as ‘Akrobeto Amanihunu’,Okonafo and Akwatefo Wuo,after advising Mzbel to stop bragging, cautioned Afia Schwarzenegger to also stop raining insults on persons on Social media, else she will leak an audio of all the lies the latter peddled against the CEO of Despite Group of Companies,Osei Kwame Despite and Father Dickson in America.