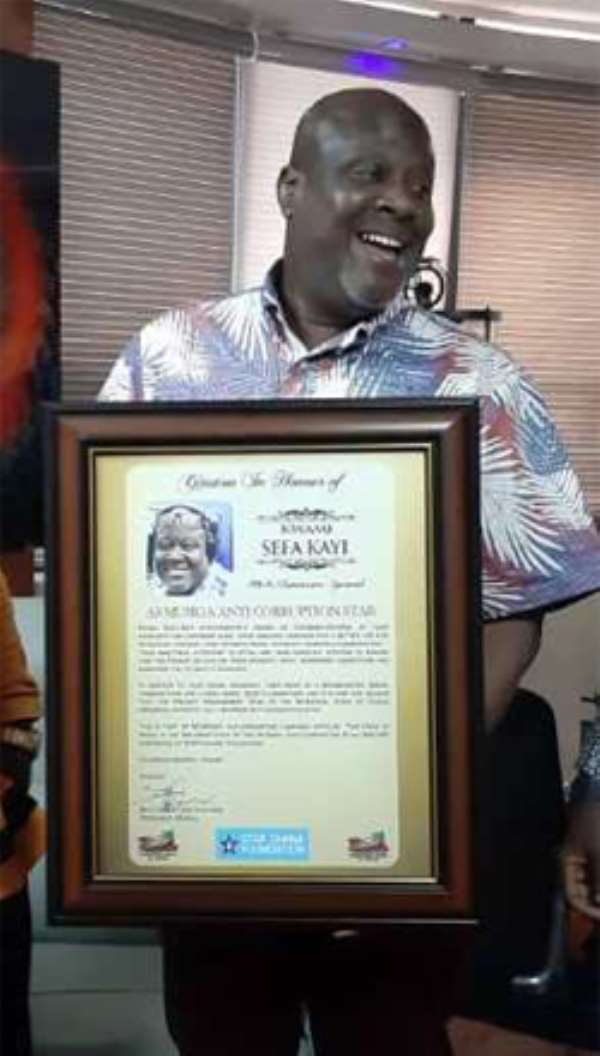 This forms part of the union's anti-corruption campaign dubbed “the role of music in the implementation of the National Anti-Corruption Action Plan (NACAP)”.

At a ceremony held in Accra, Bice Osei Kufour, immediate past president of MUSIGA, presented Kwami Sefa Kayi with a certificate and citation.

The citation read: “Kwami Sefa Kayi affectionately known as 'chairman-general' by your panelists and listeners alike, your ongoing campaign for a better life for Ghanaians through your strident social advocacy deserves commendation.

Your analytical attention to detail and your constant striving to ensure that politicians deliver on their mandate while eschewing corruption has endeared you to many a Ghanaian.

In addition to your social advocacy, your work as a broadcaster, social commentator and a role model begets admiration and it is for this reason that the project management team of the MUSIGA appoints you a MUSIGA anti-corruption star”.

Receiving the award, Sefa Kayi expressed his excitement at the gesture and thanked the union for the honour done him.

“I am highly delighted by this honor from MUSIGA which places even more responsibility on me and since we do the work for the love of God and country, we will continue to do our best.”

The former president of the MUSIGA, Bice Osei Kuffour, (Obour), said the decision to honor the radio presenter was taken by the project management team of the union's anti-corruption campaign.