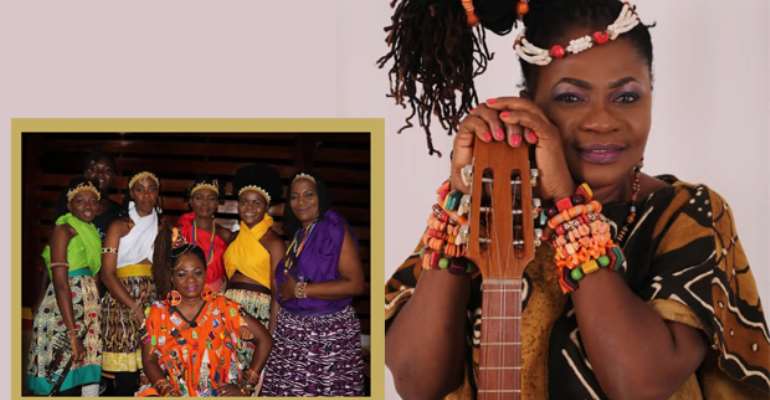 All is set for the 10th anniversary celebration of one of Ghana's leading female music groups, All Women Band, led by Della Hayes.

The week-long celebration, which would kick off in the second week of September, would be climaxed with a musical concert dubbed 'All Women Band @ 10' at the Alliance Française in Accra.

Being held under the theme: 'Celebrating Ghanaian Music', the concert, according to Della Hayes, would feature an array of top musicians, including Asabea Cropper, Bessa Simons, Naa Amanua of Wolomei fame, among others.

Since its formation, the band has given more than 300 concerts both in public and private and regularly performs at some of the major nightclubs in Accra such as  +233 Jazz Club and Grill, Cuzzy Bro's (now closed), Republic Bar, Alisa Hotel Jazz Club, among others.

In an interview with BEATWAVES yesterday, Della Hayes stated that the All Women Band (Women of Colours), since its inception, has thrilled diverse audiences in the country and beyond with its own variation of traditional highlife music.

She pointed out that the anniversary which would be climaxed with a major concert on Saturday, September 14, 2019, would be used to introduce various projects being undertaken by the group to the general public.

Formed to promote Ghanaian music, both at home and abroad, the group has gained recognition throughout Ghana, the West African sub-region and Europe.

Della Hayes expressed her gratitude to Ghanaians for supporting her and the group throughout the years.

She indicated that she is happy the group is still active to continue with her career, adding, “It is the work of God which has made it possible for me and the group to reach this far.”

She assured that the concert would be a night of fun and glamour for music lovers who would troop to the venue to watch the band and other musicians live on stage.

Aside from performing with her own band, Della Hayes also regularly performs as a guest singer with other bands such as Osibisa, Dela Botri & Hewale Band, the Bessa Band and many others.

Della Hayes released a-12 song CD in 2009 with songs like 'From Africa With Love' and 'Songs From My Heart'.

In 2015, she released 'Happy Yourself', a CD album followed by collaboration with Freddie Meiway 'Let's Have A Party' in 2016, which was nominated for a Ghana Music Award.