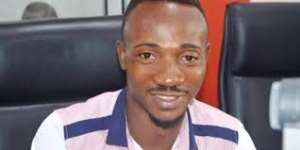 He was there to talk about audition of his new TV series, "Boys Abr3" on Thursday 29th August, 2019.

In the video circulating on social media, Salinko is seen eager to touch the breast of the interviewer, Atesem Hemaa .

However, the host in the video was heard saying, "Salinko leave my breast, why do you want to play with my breast."

Salinko has been in the movie industry for about 10 years now featuring a number of movies and he is in for a new TV series "Boys Abr3" with the audition to take place in Koforidua, the Eastern Regional capital.