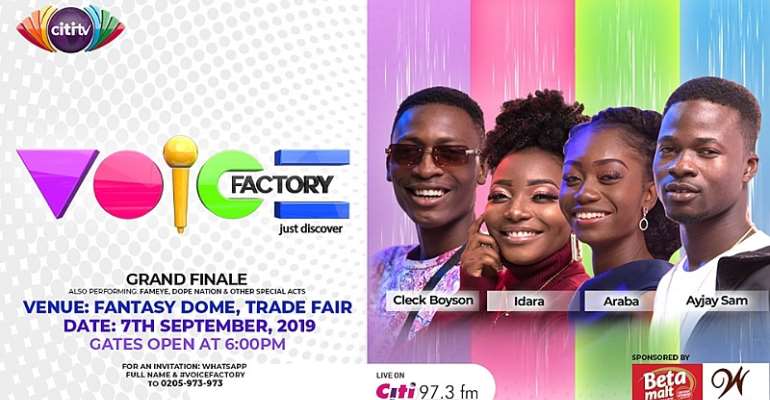 The Fantasy Dome will come alive on September 7, 2019 when the four finalists of Citi TV’s music talent show ‘Voice Factory’ prove their mettle to win the ultimate prize.

With support from the Musical Lunatics, Idara, Cleck Boyson, Ayjay Sam and Araba will be battling it out for the coveted title and the cash prize of GHc 10, 000 on the day.

Gospel musician Edinam Bright-Davies, music producer Kaywa and Richie Mensah, CEO of Lynx Entertainment will be their judges on the night.

Performing at the programme are ‘Notin I Get’ singer Fameye, ‘Zanku’ hitmakers Dope Nation, among others.

The competition whose previous editions were aired on Citi 97.3 FM is meant to unearth music talents and put them in the limelight.

The programme which started in 2009 has had artistes like Fritz Hehetror, Melody Wilson, Natasha Odoi emerging as winners.

After going through grooming and other seven weeks of performance episodes, the number was sifted to the four.

For your favourite finalist to win the competition, vote for them by dial *447*973#, choose the ‘vote’ option, select the name of your contestant, select your number of votes and send.

Voice Factory 2019 is sponsored by Woodin and Beta Malt.

Voice Factory is hosted by Osei Kwame, co-host of Citi FM’s late afternoon drive, Traffic Avenue and AJ Sarpong, host of Brunch in the Citi on Citi FM and Hall of Fame on Citi TV.