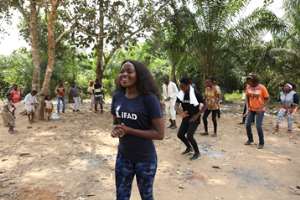 Accra, 30 August 2019 – Urgent investments in agriculture and rural development from Africa's leaders are needed to create opportunities in support of the millions of young people who will soon enter the job market.

Silver, an MTV award-winning choreographer and youth advocate for the United Nations' International Fund for Agricultural Development, will be joined by African recording artist Oluwatosin Oluwole Ajibade, known as "Mr Eazi," at the AGRF Youth Town Hall on 3 September.

“We are going to AGRF to capture the attention of African leaders and to share a message with young people everywhere: our generation can end global hunger, but only if governments invest more in agriculture and the next generation of young farmers,” said Silver.

Nearly 1 billion of the world’s 1.2 billion youth live in developing countries, about half of them in rural areas where they are most often poor, lack economic opportunities and face constraints to access land, services, technology and training, according to IFAD's recently released 2019 Rural Development Report – Creating Opportunities for Rural Youth.

Adding to the challenge, in Africa it is estimated that 10-12 million young people enter the job market every year. And in rural areas, agriculture is still the biggest source of livelihoods.

"With government investments and policies in support of economic development, agriculture can provide opportunities for millions of young people who might otherwise migrate to nearby cities or further abroad in search of work," said Silver.

The two Afrobeat stars are participating in AGRF as part of an IFAD youth-focused campaign called Our Future is Here that includes a TikTok "dance challenge" calling on people around the world to “make their moves matter” by recording a 15-second dance video to the song "Freedom."

The song was specially created by Mr Eazi and aims to positively depict agriculture and attract young people to farming, has also been used to create a campaign video featuring rural youth in an IFAD-supported project in Cameroon dancing with Silver to her choreography.

The advocates will present the final results at an IFAD conference in February 2020, reminding government leaders of the need to increase investments in agriculture as well as long-term development and training for rural youth.